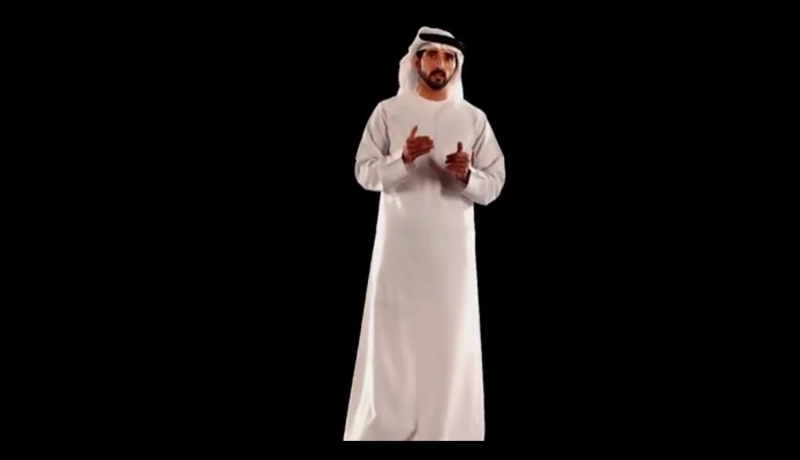 Today, I utilised hologram technology to address the audience at the #WorldGovSummit on the topic of '7 Shifts Shaping Future Cities'. Anticipating future shifts & challenges, we need to harness the power of innovation & creativity to set standards for smart cities. pic.twitter.com/3aPVAZSCkx

“As we talk about the future of cities, we must remember that cities are driven by global economic developments and the harmonisation of cultures and ideas,” he said.

“Dubai is at the heart of every discussion on future cities, the world looks at us for a glimpse of tomorrow. Our goal, as described by Sheikh Mohammed bin Rashid Al Maktoum, is to put Dubai ’10 years ahead of world cities’,” he added.

World cities consider Dubai as a model for future cities. We are working hard to realise the vision of @HHShkMohd to place Dubai 10 years ahead of other cities. Concerted efforts are required from gov’t & private entities to make Dubai the world's No. 1 city.

Highlighting issues such as mobility, Sheikh Hamdan stressed that future cities should provide 80 per cent of all services within 20 minutes of their residents.

He cited a study by the University of West England, which found that reducing commute time will increase happiness and wealth. At present, the average commute time in a city is 60 minutes, which could reach up to 1 hour 20 minutes due to traffic.

Dubai is seeking to address this issue by introducing the Hyperloop as well as the RTA’s proposed air taxi initiative, he said.

“The future is not just about technology, it is about the human being, innovative ideas and tolerance,” said Sheikh Hamdan. Citing Dubai as an example, he said the city “is a model of tolerance and coexistence”, where more than 220 different nationalities live in peace.

“Cities are the foundation of global economic development and the convergence of cultures and ideas…Measuring the development of cities depends on the quality of life and the journey towards the future provides us with passion and energy to achieve greater goals,” he said.

He added: “The competition between cities of the future will not just be about infrastructure, but also about how to attract minds.”