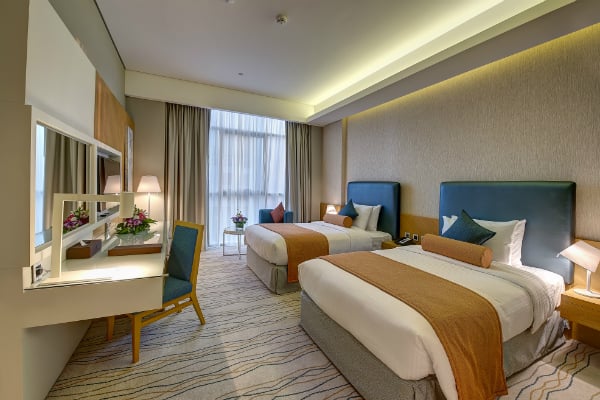 Seven hospitality projects with a combined estimated value of around $1.1bn were put on hold in the GCC in March, a new report has found.

The report by research firm BNC Network found that the largest hospitality project to be put on hold was Business Park and Hotel located in Jeddah, worth $600m.

During the same month, the GCC hospitality market recorded an increase of 1 per cent month-on-month in terms of volumes and values.

“Around 12 hospitality projects with a combined estimated value of around $945m (Dhs3.46bn) moved to construction from other stages during the month,” Avin Gidwani, CEO of BNC Network.

“The largest hospitality project in dollar terms to be awarded was the extension and renovation of Beach Rotana Hotel in Abu Dhabi’s Tourist Club Area worth $215m.

“Six hospitality projects with a combined estimated value of around $390.5m were completed during the month.”

In terms of volumes, the GCC’s hospitality industry constituted 7 per cent of all active projects in the GCC’s urban construction sector.

From a value perspective, the projects accounted for 13 per cent of the total estimated construction value, the report added.

During the first quarter, 62 projects with a combined estimated value of over Dhs9.1bn ($2.5bn) were launched in the region.

“With the upcoming mega events such as Expo 2020 in Dubai and the World Cup in Qatar, the GCC governments are obviously preparing themselves for major global events that require additional hotel and tourism facilities that also will help them diversify revenue sources,” said Gidwani.

“With the ongoing economic integration process and as the GCC countries prepare to develop a common market and once the physical infrastructure – such as the GCC rail networks connect the major cities – the regional tourism sector will get a major boost. People from one city will travel to the other for overnight stays and return without having to cross the border formalities – such as the European Union. The region is preparing for such heavy tourism traffic,” he added.