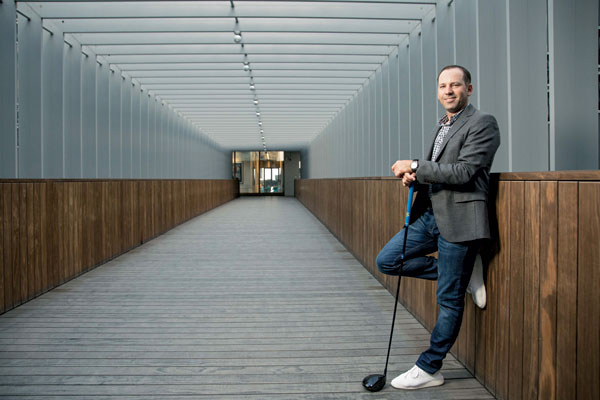 For 39-old Sergio García, golf is a sport that runs thick through his family. His father was a professional golfer, his wife Angela Akins was a former reporter for Golf Channel, his daughter Azalea is named after the 13th hole at Augusta National where he won the 2017 US Masters, and when it was time to reveal the gender of the baby last November, he shot an exploding golf ball – in case you haven’t already seen that boomerang video on his Instagram page, it’s a boy.

On the sidelines of the DP World Tour Championships in Dubai last November, we met with the Spanish golfer currently ranked 39th in the world. García went pro in 1999. By then, he had already enjoyed a fair deal of success at the amateur level becoming the youngest player to make the cut at a European Tour event when he was just 16.

Surely, a promising career lay ahead as he went pro and commercial partners were quick to realise García’s enormous talent. One among those sponsors is Swiss watchmaker Omega.

“Our relationship with Omega has been going on for a long time. We’ve been associated with the Swatch Group since 2000 and with Omega since 2002,” said García.

One of the perks of being an ambassador for Omega is, he explains, the ability to get his hands on some of the brand’s most coveted timepieces.

“One of my favourites is a rose gold Seamaster with a black rubber strap. Another one is the new [Omega Sea-master Aqua Terra] Ultra Light sports watch that I wear even when playing golf. Omega has some amazing timepieces, including tourbillons that are just spectacular.”

Three years ago, it was a stunning win at the OMEGA Dubai Desert Classic that marked the beginning of perhaps García’s most successful year as a pro golfer.

“Winning at the Emirates Club, the OMEGA Dubai Desert Classic was obviously a great treat. The OMEGA Dubai Desert Classic is an unbelievable event and you just have to look at the type of players that have won there to be able to understand why it’s an honour to be a part of that group. It was also the beginning of a really amazing year for me in 2017 that included winning the Masters.”

Winning the Green Jacket at the Masters is a peak moment for any golfer – not least García who has won 35 pro tournaments to date including 16 European Tour wins and 10 PGA Tour wins.

For García though, commentators suggested, winning the Masters released a pressure valve. Although he hasn’t yet returned to those giddy heights since then, it isn’t something that he’s overly concerned with.

“Winning the Green jacket doesn’t mean everything is over. We are competitors and still want to keep getting better, playing well and having chances at winning many other tournaments.”

A fiercely competitive streak has also resulted in a few missteps. Last year, at the inaugural Saudi International on the shores of the Red Sea, he was disqualified for damaging the greens during his third round.

“We are not robots, we are humans and sometimes we lose our temper. It’s just a matter of looking back and trying to learn as much as possible.”

Having apologized shortly after the incident, media reports suggested that he will reportedly waive his appearance fee at his next showing at the annual event in Saudi Arabia later this month.

An appearance fee for pro golfers like García range in the hundreds of thousands of dollars – winning a tournament takes that figure into millions. He’s made a few investments with them, including partnering with some of his friends in the restaurant business, though he’s actively involved in philanthropic projects through the Sergio García Foundation that he set up in 2002.

“Though all the three foundations we have set up in Spain, Switzerland and the US, we’ve done several things like helping handicapped people get into the game of golf, invested in cancer research among children, and invested in an X-Ray room in a hospital in Madrid. Our focus is mainly on children.”

Now into the third decade of his career as a pro, García hasn’t even remotely indicated that he is contemplating stepping back from the game, though he does have an idea of what he’ll like to do once it’s time to call it quits.

Chief among the things is consulting on golf course designs, something that he has already begun doing when he’s not competing on the field.

“I don’t know where I will be in 10 or 12 years. I don’t know if I will be playing on the Champions Tour or maybe spending time with the family and looking for hobbies.”

For now, García is focused on getting back to his 2017 form. A good way to begin would be to ensure that he is off to a strong start at what is referred to as the Desert Swing – three tournaments, one each in Abu Dhabi, followed by Dubai and finally in Saudi Arabia – that will take place this month.

If you need to find García during the tournament in Dubai, you’ll know where to find him.

“I think that the atmosphere on the 18th hole is amazing. You have the 9th hole there on the right side, massive hospitality tents, and the grandstand on the left.

“You can almost feel the breath of the people because they are so close to the green there. It definitely makes it extra special if you walk up there with a chance of winning.”

And a significant chance of him winning is what his opponents will no doubt have to contend with this month.