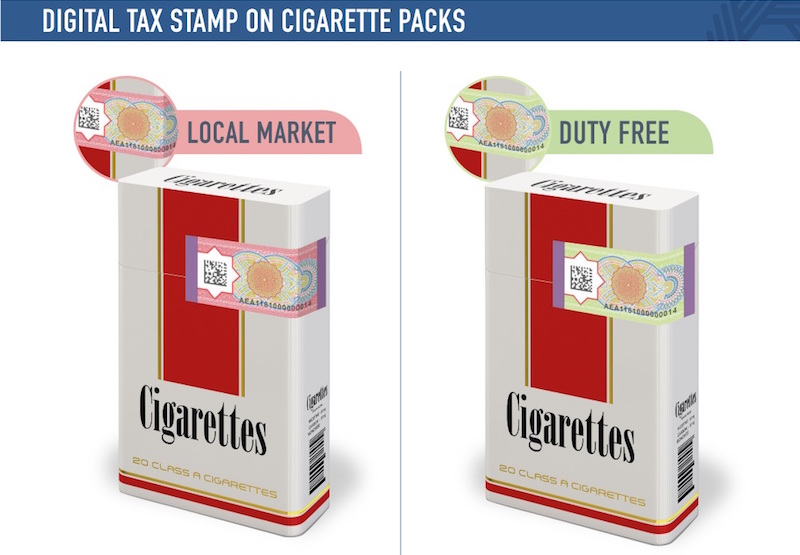 The UAE’s Federal Tax Authority (FTA) has reiterated that the sale and possession of all types of cigarettes not bearing digital tax stamps will be prohibited across the country from Thursday, August 1, 2019.

The FTA explained that two types of digital tax stamps have been approved.

This first is a red one, which is meant to be placed on the packaging of tobacco products (including cigarettes) sold at all local markets, as well as at duty-free in arrival lounges.

The second type, green, has been earmarked for tobacco products sold at duty-free in departure lounges.

The move is part of the ‘Marking Tobacco and Tobacco Products’ scheme, which went into effect at the beginning of 2019.

The scheme seeks to electronically track cigarettes packs from the production facility and until they reach the end-consumer, in order to protect consumers from low-quality products, combat tax evasion, and ensure that the excise tax due on these products has been settled.

Tobacco manufacturers are required to place the stamps on the products within the production facility immediately after packaging, if produced in the UAE, or prior to importing them if they are produced abroad. The FTA has determined a specific placement and method to apply the stamps to each product.

The authority has urged all cigarette dealers and producers in the UAE to comply with the measures in order to avoid the penalties.

It also called on consumers to check for digital tax stamps on the packaging of cigarettes they buy and inform competent authorities of any violations.

“The authority has sought to implement an integrated and widespread awareness campaign starting from the second quarter of 2018 – several months before the scheme’ went into effect – to allow sufficient time for local markets to prepare and avoid any adverse effects to their commercial activities,” said FTA director general Khalid Ali Al Bustani.

“The timeline for the scheme allowed cigarette traders and producers sufficient time to prepare for the new system,” he said.

“As of January 1st, De La Rue – the company commissioned by the FTA to operate the system – made the digital tax stamps available for purchase on the FTA’s website. As of May 1, 2019, the import of any type of cigarettes into the UAE not bearing the stamps has been prohibited; meanwhile, the sale of cigarettes packs not bearing the stamps will be prohibited across UAE markets as of August 1, 2019.”

He also confirmed that scheme will be gradually expanded to include all types of tobacco and tobacco products.