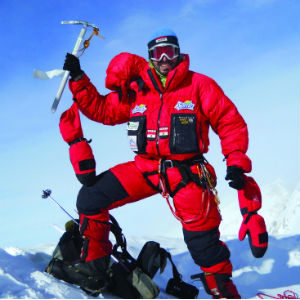 Omar Samra confesses that he is not a “super early riser.” But running his own business gives him the flexibility to manage his time in the office and climb the highest peaks in the world, the CEO says.

After all, climbing mountains is what inspired the adventurer to give up a cushy banking job and start his own travel company, Wild Guanabana, two and a half years ago. The first Egyptian and the youngest Arab to climb Mount Everest, Samra has scaled most of the tallest peaks in the world. He says his business is based on the belief that travel can inspire and motivate people to push their boundaries.

And to reinforce that belief, Samra and his team travel across the world and create unique life-changing experiences for their clients. He recalls a recent itinerary to Lebanon that the firm offered during UAE National Day weekend. “Most people from this region have been to Lebanon, but we designed a trip where the travellers had to build igloos and snow caves. It was great, they had to stay in a small village and eat local food. It was really exotic,” he says.

“I have partnered with a company called AGT, a wholesaler of carbon credits,” says Samra. “And this company calculates all the emissions generated by the firm including travel, AC/ lights used in the office, the hotels they stay in and so on.” While offsetting is a massive investment, Samra says being environmentally friendly is vital to him and his company. “My first hire in the company was an environmental consultant,” he says.

After spending several months putting together the eco- friendly layout of the company, Samra launched its operations.

“We started off marketing the environmental aspect as the biggest selling point thinking that because we believed in it, everybody would believe in it. But we realised that it was not working,” he says.

Samra soon recognised that many people in the region still equate sustainable travel with a miserable experience of sleeping on the floor and eating beans.

“The continuous battle is raising awareness about this type of travel and basically changing misconceptions,” he says. While Wild Guanabana now focuses more on selling its distinctive journeys, Samra says he tries to reinforce the environmental angle too.

“When I look at 2009, compared that with 2010 and then 2011, we have achieved more than 100 per cent growth,” he says. “I would say we are profitable, but at this stage we keep reinvesting everything back into our business.”

GCC tourism is not an industry that lends itself to entrepreneurship and startups. Gaining bulk will be essential for Wild Guanabana, as the company faces stiff competition from large players.

But in the next two years, Samra hopes that the regional industry will reach a level of maturity wherein every form of travel – including eco-friendly practices – will be adopted.

“Tourism is the cancer of nature if it’s done the wrong way. Local lifestyles and existing environments are easily damaged. So it’s essential to create a positive experience through sustainable methods,” says Samra.

“Wild Guanabana is a business and we need to make money. But at the same time, we don’t want to take shortcuts to get there. If we focus on the experience, focus on the sustainability aspect, and use travel as a vehicle for positive impact, the rest will fall into place,” he says.