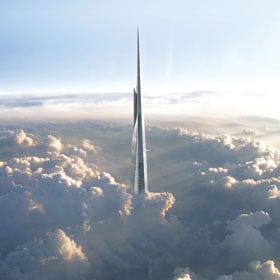 Saudi Arabia’s Kingdom Tower, the world’s first kilometre-high skyscraper, will consume around half a million cubic metres of concrete and 80,000 tonnes of steel, according to experts.

Saudi Bin Laden Group (SBG), the construction company tasked with building the skyscraper, has appointed the consultancy Advanced Construction Technology Services (ACTS) to carry out the quality control of all materials used in the construction of the tower.

Situated in Jeddah, the Kingdom Tower will have a total construction area of 530,000 square metres and will comprise of 200 floors, out of which 160 are habitable.

Being built at the cost of $1.23 billion, the Kingdom Tower will be at least 173 metres taller than Dubai’s Burj Khalifa.

The tower, which will be developed by Jeddah Economic Company (JEC), is the centrepiece and the first construction phase of Kingdom City, a 5.2 square kilometre city in Jeddah along the coast of the Red Sea.

Work on the tower began in 2012 after a number of construction delays and it is scheduled to be completed by 2018.

Owing to the tower’s height, ACTS said that special equipment would be deployed to ensure that the concrete could be pumped to high elevations.

Around 100 expert staff members would work on the testing for the skyscraper, a statement said.

The consultancy will also install a fully equipped site laboratory, which will carry the day-today quality control operations and will provide specialised testing services from its laboratory facility in the Briman area of Jeddah.

“We will be investing our experience and knowledge to provide accurate, traceable and reliable test information in the largest mega tall building in the world,” said Khaled Awad, chairman of ACTS.

ACTS has previously worked on projects such as Jeddah’s King Abdulaziz International Airport, which involved the testing of around 3.5 million cubic metres of concrete.