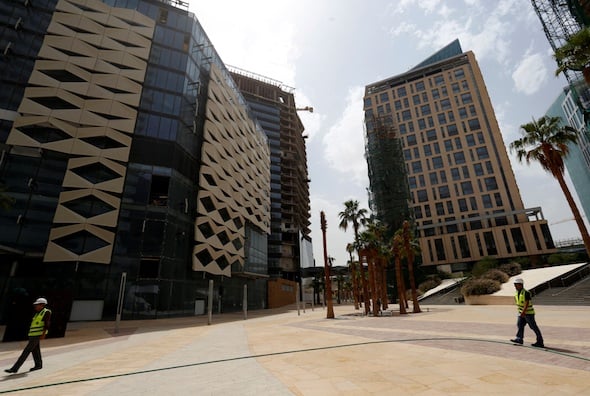 A glitzy $10bn financial district in Riyadh hopes to open its first phase for business this year but is struggling with red tape and uncertainty about its ownership, showing the challenges facing Saudi Arabia’s economic reforms.

Construction of King Abdullah Financial District (KAFD) began in 2006, but the project has been plagued by construction delays, cost overruns and doubts about finding enough tenants.

The government said in 2016 it would rescue the project as part of efforts to diversify the oil-reliant economy. It said it would transform the district into a special business zone with competitive regulations, financial incentives and visa exemptions for foreigners working there.

The plan included transferring control to the kingdom’s sovereign wealth fund, the Public Investment Fund (PIF), an idea since abandoned.

Salman Albaiz, a director at the project, said this week about a fifth of the 1.6 million square metre (17.2 million square foot) site, including a sleek conference centre and a modern white mosque, was now complete.

“The first phase we intend to open – if things go well with the government – in June or July,” Albaiz told Reuters during a tour of KAFD. “That will be a soft opening for the district.”

But he said the first phase was still awaiting additional government approvals before the opening. “We keep stumbling upon red tape and government procedures in decision-making,” he said.

The district boasts energy-efficient, glass skyscrapers that contrast with drab architecture in most of Riyadh. A walkway designed to resemble a dry “wadi” riverbed will be lined with restaurants and shops.

It could also help to change how business is regulated in Saudi Arabia. Albaiz said it would resemble Dubai International Financial Centre, which attracted foreign firms with its own regulatory regime.

In theory, businesses registered at KAFD would be able to issue visas directly and obtain licences from a dedicated authority.

KAFD, with capacity to house 50,000 residents, could become a home to the foreign business community. Saudi Arabia’s strict social code, requiring women to wear dark, loose robes and restrictions on the mixing of unrelated men and women, would be relaxed, Albaiz said.

But authorities have yet to finalise the “special zone” rules, making it difficult to draw more firms.

Uncertainty about KAFD’s ownership also needs resolving. In 2015, the PIF signed a preliminary agreement for the purchase of KAFD from its current owner, the Saudi Public Pension Agency.

But the two parties have let that deal expire, said Albaiz. In response, the government has set up a ministerial committee to find a new owner and resolve questions about costs. Albaiz said he hoped a decision would come within about two months.

For now, Albaiz aims to operate what is ready. The first phase of KAFD could bring annual revenues of 240 million riyals ($64 million), rising to 3.5 billion riyals once the whole project is complete, he said.

Albaiz said the entire project was 80 to 90 per cent complete and a further 8 billion to 10 billion riyals would be needed to finish it, on top of about 30 billion riyals already spent.

“The whole project is almost done. This is what’s so sad about it,” he said. “It’s like building the whole thing and you just have not built the windows and the doors.”