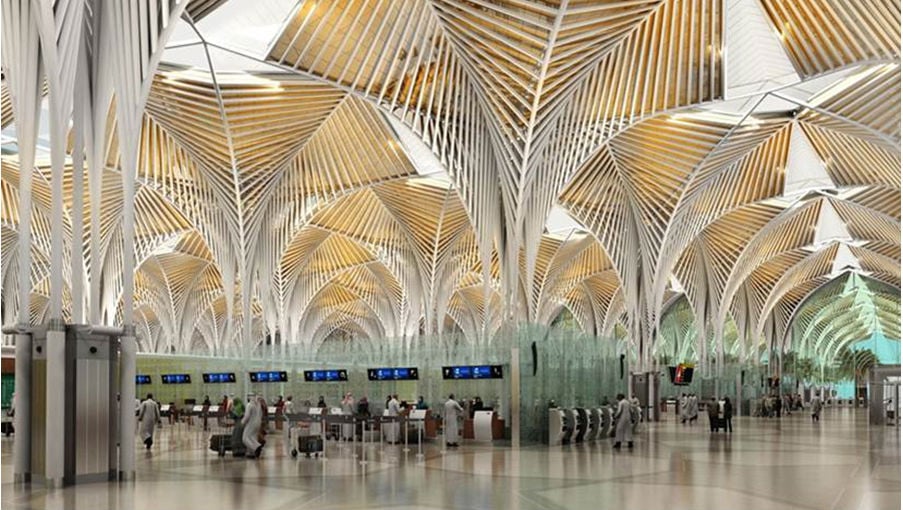 Saudi Arabia recorded a first in its aviation industry when it opened up phase one of the $1.2bn Prince Mohammed Bin Abdul Aziz International Airport in Madinah, in July.

The project consists of a three-level terminal covering more than 156,000 square metres with 16 aircraft stands and boarding bridges. It also includes a widened and extended runway with 10km of taxiways capable of accommodating A380-size aircraft.

Launching the project, presidentof the GACA Sulaiman Al-Hamdan said: “This new international airport is of strategic importance to Muslims all over the world – serving as the gateway to Madinah which is home to the second Haram Al Sharif, as well as to GACA – being the first of a series of new airports that we will open across the kingdom in an effort to build a sustainable and profitable modern airport system.”

According to consultancy firm Frost & Sullivan, the new airport is expected to significantly boost Madinah’s economy. It is anticipated that it will improve commercial trade to at least $107m and create almost 20,000 new job opportunities.

Accommodation for some 100,000 residents will also be constructed.

“The focus of our recently rolled out corporate strategy and plan is to transform Saudi Arabia’s aviation sector profitability and performance by encouraging foreign investments – and privatising the management, and operation, of our airports,” said Al-Hamdan.

He also stressed that the civil aviation industry would serve as a key contributor to the government’s plan of diversifying away from oil revenues.

Analysts believe privatisation is a welcome move, providing a more competitive environment for airports to function in as well as bringing in efficiency improvements.

“Growth is also more likely in the privatisation set-up with airports looking to non-aeronautical revenue sources. Though most of Saudi Arabia’s economy is fuelled by oil, the fact that the airport privatisation comes hand in hand with the opening up of the
Saudi capital market increases the chances that it will lead to alternative revenue streams,” explains Frost & Sullivan business and financial services consultant Vinod Cartic.

“Regional governments will be watching the progress of this project to see if further private sector involvement in airports and air traffic management is a model that could be exploited for their own aviation infrastructure.

“Opening up the aviation sector will bring substantial benefits in terms of economic growth, safety management and skills development,so this is an important test case for the private sector,” he states.

While the growth of Saudi Arabia’s aviation sector will certainly help the country diversify, experts warn that several challenges persist.

The kingdom attracts close to 11 million tourists annually, of which 5.7 million are aviation passengers, according to Frost & Sullivan. Aviation traffic is further likely to grow at a compound annual growth rate of 27 per cent over the next decade.

“Passenger numbers in the kingdom are expected to double by 2020, which presents obvious and immediate challenges it terms of the need for new airport terminals,” says Swift.

“However, it also presents a less obvious challenge to the invisible infrastructure air traffic management. It will be vital that corresponding investment is made in this area, in order to fully achieve the benefits of the airport investment.”

“Preventing monopoly and illegal tie-ups between the airport, the airlines, and aerotropolis management will be a big challenge.”

Then there is the need for a trained work force. Some estimates suggest that the Middle East and Saudi Arabia in particular will require over 60,000 trained technical personnel.

But Cartic remains confident that the kingdom can overcome these issues.

“With the Saudi economy given a boost by a burgeoning young population with higher disposable income, enhanced aviation infrastructure and an open capital market attracting greater foreign investment, the overall outlook for Saudi aviation is very positive,” he states.

Given the recent volatility in oil prices and the geopolitical conflict in the region, Saudi’s ability to replicate the success achieved by cities such as Dubai in boosting aviation will certainly help its economy take flight.