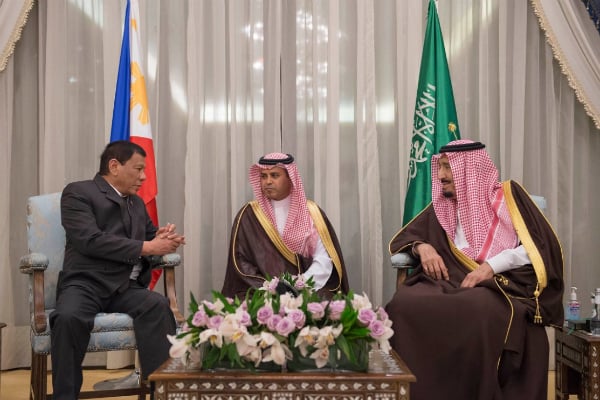 The two oversaw the signing of deals related to consultations and a cooperation programme.

An accord was signed in the field of employment and a cooperation deal between Prince Saud Al-Faisal Institute for Diplomatic Studies and the Institute of the Philippine Foreign Service.

The two are also working on cooperation in security, anti-terrorism and combating transnational crimes, according to consul general Iric Arribas.

Duterte, who arrived in the kingdom on Monday evening, was on the first leg of a Gulf tour that will take him to Bahrain from Wednesday to Friday and Qatar from Friday to Sunday.

The president’s office has said he aims to protect the rights and welfare of more than 1 million Filipinos working in the Gulf and invite Middle East investors to the Philippines.

A Filipino president has not visited the region since 2008.