Saudi's entertainment push: Is it affordable for all? - Gulf Business 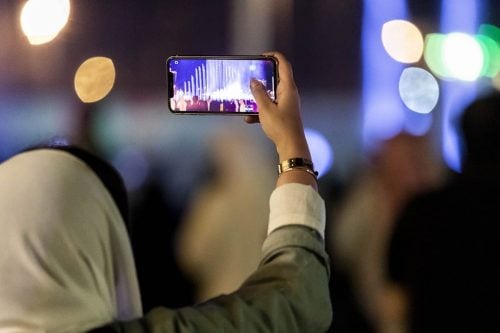 As couples on their way to a lavish dinner strolled past palm trees hung with chandeliers in a historic quarter of Riyadh, the recent belt-tightening downturn in Saudi Arabia’s economy seemed a world away.

Inside a replica of Carbone, a Michelin-starred Italian restaurant in New York, diners ordered Wagyu beef steaks for SAR500 ($133), just over the minimum spend required to secure a reservation weeks in advance. Nearby, musicians played in perfumed courtyards as women driving golf carts delivered customers to a selection of pop-up restaurants from around the world.

The evening towards the scheduled end of the “Riyadh Season” – a government-sponsored flurry of food offerings, concerts, sporting events and carnivals – encapsulated much of what Crown Prince Mohammed bin Salman wants his kingdom to embrace.

Since rising to become de facto leader, he’s sought to soften its reputation as a ultra-conservative Islamic state propped up by oil, rolling out historic decisions including easing restrictions on live music, cinema and dress, and opening to foreign tourists.

But the extravaganza, and the debate it triggered, highlighted twin challenges for authorities as they look to promote broad acceptance of the changes: ensuring the less well-off aren’t alienated by lifestyle choices they can’t afford, and making them richer so their spending can fuel a nascent economic recovery.

“There was a rush toward entertainment in a way that distanced many people – the have-nots,” said Saad Albazei, a literature professor and a former member of the consultative Shura council. He supports the transformation plan but worries the high prices of some of the new events could exclude people.

Consumer spending is recovering after faltering as the slump in oil prices from 2014 forced the government to trim generous subsidies, slowed the economy and made Saudis watch their wallets.

Recently, officials said they’re pulling back on government spending to let private investment take the lead. The non-oil economy grew 4.3 per cent annually in the third quarter of last year, the fastest since 2014.

Riyadh Season is part of the pitch. It generated SAR1bn in revenue over two months from its mid-October start, attracting 10 million visitors, though it hasn’t made a profit for the government.

“If we got anything out of Riyadh Season, it’s that demand is there, social acceptance is there,” said Faisal Bafarat, chief executive of the General Entertainment Authority.

“Businessmen are coming and saying we want to invest.”

Still, debate about prices has persisted, with Albazei surprised when he raised the issue on Twitter and hundreds of people replied to his post.

The fact that Saudis were openly discussing the issue after a crackdown on domestic dissent is a sign it struck a chord. Inequality is nothing new in Saudi Arabia, and many Saudis view the contrast between legions of royal princes and the beggars at street intersections as a fact of life. Median family monthly income was SAR11,494 in 2018, about $37,000 a year.

Yet before Prince Mohammed began his shakeup, there were few ways for the rich to spend on leisure in public sight. Music was frowned upon by religious conservatives. There were no movie theatres, and vice police roamed streets enforcing gender segregation. Now, as the government sponsors rave-like concerts alongside more sedate Arabic theatre, spending that used to happen abroad is coming home.

Inside the kingdom, cash withdrawals combined with card-based “point of sales” transactions increased 5 per cent in the same month, according to the latest data available.

Restaurants and cafes saw a 54 per cent annual increase in the number of purchases using bank cards.

Bafarat said the government has far exceeded its targets for Riyadh Season. The main attraction, a sprawling complex called “Riyadh Boulevard,” was built with a capacity of 35,000 people; in the first 24 hours, 1.2 million showed up, he said.

“It was really a shock to all of us,” Bafarat said. To control crowds, officials instituted a fee of SAR50, and for a while raised it to SAR100. Events there will now continue to March, way beyond the slated December end-date.

Some Saudis dismissed concerns about prices and complaints from conservatives who say social openness has gone too far.

“If you go to any country and there’s a season or tourist event, you’ll find the prices are more than double,” said Munira Mohammed, a 50-year-old retired university employee. “Those who want to participate can, and nothing’s mandatory.”

Bafarat said the government tried to offer options for all, including concerts by foreign and local musicians, a winter-themed amusement park and a safari with over 80 species of animals from abroad.

Complaints often focused on the most expensive eatery — a restaurant from Ibiza where reservations cost SAR5,000 per person — or VIP concert tickets that cost thousands of riyals. But a handful of events were free or had nominal entry fees, Bafarat said.

For some, though, the festival opened their eyes to a world they can’t yet inhabit.

Sipping tea on a plastic chair in a traditional Riyadh market, Nahar Al Subaei, 28, said the wealthy probably don’t realise how expensive some of the events seem to other Saudis.

In September, entertainment czar and royal court adviser Turki Al Alshikh sparked furor when he promoted an interest-free credit card for Riyadh Season, as Saudis mocked the idea of going into debt to attend concerts.

But the jamboree showed Saudis were willing to put their money behind the country’s transformation – when they can.

Yet Saudis “are in a phase of excitement over the social changes, which have been tangible and fast-paced,” she said.

Project manager Ziad Jamil, 27, had made four visits to Riyadh Boulevard, where he’d spent around SAR2,000. As night fell, a fountain shot water into the sky while a patriotic ode to Prince Mohammed played from speakers.

“If you were here three years ago, there was nothing other than coffee shops we would waste our time in,” Jamil said.