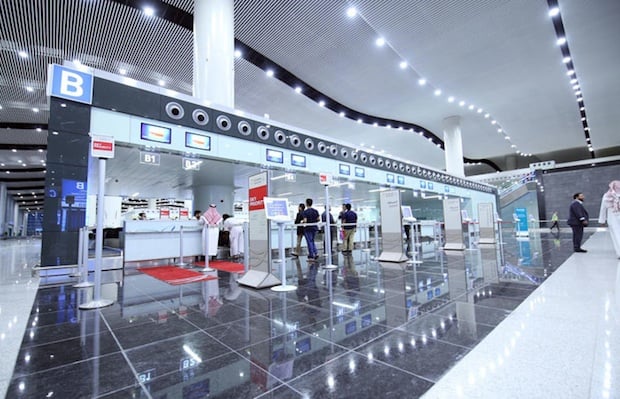 State-owned Saudi Arabian Airlines (Saudia) has announced that its domestic operations at Riyadh’s King Khalid International airport are shifting from Terminal 3 to the new Terminal 5.

In a statement, the airline said that the move will happen at midnight on Monday, August 22.

Spread across 106,500 square metres, the new facility will offer some 36 check-in desks for Saudia customers including 30 for economy class passengers.

It will also have 10 self-service machines that will help customers print boarding passes.

The terminal is special-needs friendly with 30 elevators and escalators and will provide more prayer areas and bathrooms.

Passengers will also be offered free shuttle buses around-the-clock between the domestic and international terminals by the airport.

Mohammed Ali Al-Bakri, deputy CEO for strategic projects at Saudia, told the paper that technical capabilities in the new terminal will allow the airline to implement its “operational plans”.

Local cost operator flynas also shifted all its domestic operations at the King Khalid airport to Terminal 5 on August 13.

The kingdom’s first privately-run terminal, the new facility is being operated by a subsidiary of Irish airport operator Dublin Airport Authority (DAA).

With a capacity of up to 12 million passengers annually, the terminal can accommodate more than 16 light-bodied or eight wide-bodied aircraft.

It will also have 60 check-in desks, about 4,500 sq m of retail and food and beverage outlets and a parking lot that can accommodate 3,000 vehicles.