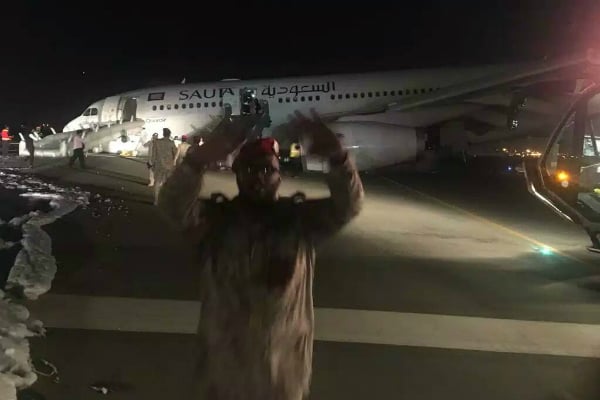 A Saudi Arabian Airlines (Saudia) plane flying from Madinah to Dhaka made an emergency landing in Jeddah on Monday after suffering a malfunction.

It made an emergency landing at Jeddah’s King Abdul Aziz International Airport at 9:50pm local time without the use of its front wheels.

Video footage of the landing showed sparks underneath the plane as it skidded along the runway with its front tilted forward.

The aircraft was met by firefighting and rescue teams and passengers were evacuated via emergency exits.

The AIB initially said 52 passengers were slightly injured and some suffered broken bones during the evacuation.

Later reports indicated 70 were treated at the airport and four others were taken to a health centre.

Images posted online by travel safety consultant JACDEC showed passengers being led from the plane. The company said the aircraft was leased from low-cost Turkish airline Onur Air and circled for 3.5 hours before landing.

A Saudia spokesperson said the pilot “made several attempts but failed to correct the malfunction” and subsequently made an emergency landing with the nose gear retracted.

There were 141 passengers on board and 10 crew members.