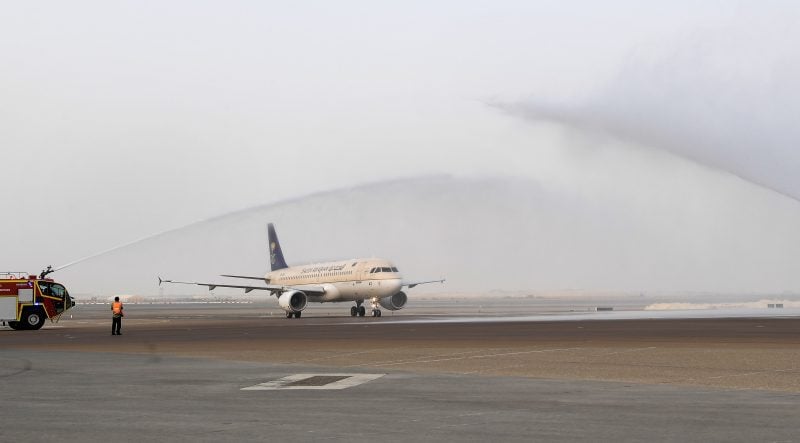 Saudi Arabian Airlines (Saudia) has started operating daily flights to Abu Dhabi from the new King Abdulaziz International Airport in Jeddah, with the first flight landing in the UAE capital on Saturday, August 10.

The flight, an Airbus A320, took off from Jeddah at 2.44pm and landed in Abu Dhabi International Airport at 6.17pm and was greeted with a customary water cannon salute.

It was one of the first international flights to take off from Jeddah’s new King Abdul Aziz International Airport.

Saudia has also started flights to Bahrain and Muscat, bringing the total number of destinations served by the new airport to 21 domestic and three international ones, it added.

Jeddah’s new airport had a soft launch in May 2018, with a staggered opening in phases.

Spread across 27,987 square metres, the airport will operate 46 gates, and is designed to serve about 30 million passengers annually, when fully operational.

It will also have 220 check-in counters for all flights, 80 self-service counters and five lounges for premium passengers.

Bryan Thompson, CEO of Abu Dhabi Airports, said: “The UAE has enjoyed historically close relations with Saudi Arabia, and the city of Abu Dhabi is a top destination for tourists from across the kingdom looking for a short break in the GCC.

“Saudi nationals who transfer through Abu Dhabi to destinations in the United State of America will also be able to make use of our US Immigration pre-clearance facility, allowing travellers to the US to clear the American border before they fly.”

He added: “The new airport in Jeddah is both an impressive engineering feat and a breath-taking piece of architecture. I am delighted that Abu Dhabi International Airport was one of the first international destinations for flights from the new airport.”