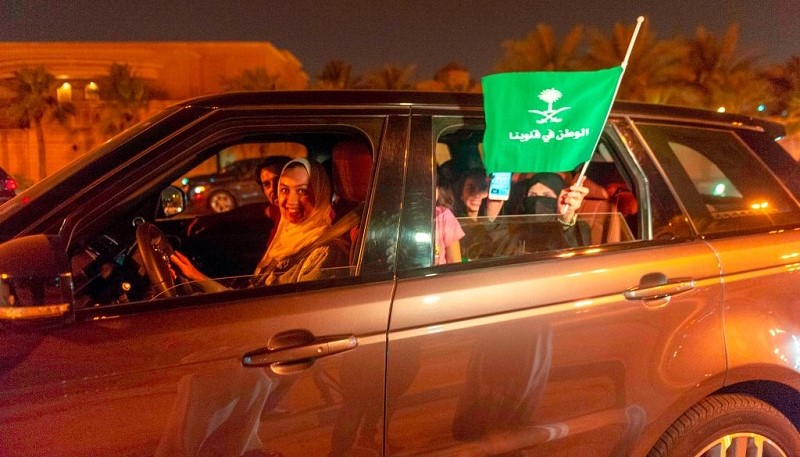 Women in Saudi Arabia took to the roads at midnight on Sunday, ushering in the end of the world’s last ban on female drivers, long seen as an emblem of women’s repression in the kingdom.

“It feels weird, I am so happy … I’m just too proud to be doing this right now,” said 23-year-old Majdooleen al-Ateeq as she cruised across Riyadh for the first time in her black Lexus.

The lifting of the ban, ordered last September by King Salman, is part of sweeping reforms pushed by his powerful young son Crown Prince Mohammed bin Salman, in a bid to transform the economy of the world’s top oil exporter and open up its cloistered society.

Women drove up and down a main road in the eastern city of Khobar and cheered as police looked on.

“We are ready, and it will totally change our life,” said Samira al-Ghamdi, a 47-year-old psychologist from Jeddah, one of the first women to be issued a license.

The lifting of the ban, which for years drew international condemnation and comparisons to the Taliban’s rule in Afghanistan, has been welcomed by Western allies as proof of a new progressive trend in Saudi Arabia.

But it has been accompanied by a crackdown on dissent, including against some of the very activists who previously campaigned against the ban. They now sit in jail as their peers take to the road legally for the first time.

Women with foreign drivers’ licences only began converting them earlier this month, so the number of new drivers remains low. Others are training at new state-run schools, with three million women expected to drive by 2020.

Some still face resistance from conservative relatives, and many accustomed to private drivers say they are reluctant to take on the country’s busy highways.

“I definitely won’t like to drive,” said Fayza al-Shammary, a 22-year-old saleswoman. “I like to be a princess with someone opening the car door for me and driving me anywhere.”

The Interior Ministry plans to hire women traffic police for the first time, but it is unclear when they will be deployed. The public security directorate reported no unusual incidents one hour after the ban ended.

Riyadh resident Amr al-Ardi said the women in his family would wait to see how the system works before they start driving.

The decision to lift the ban in the tightly controlled kingdom – where once-forbidden cinemas and concerts have also returned – is expected to boost the economy, with industries from car sales to insurance set to reap returns.

The change should save families billions of dollars on chauffeurs while encouraging more women into the workforce and raising productivity, if only modestly at first.

Many Saudis celebrated on social media, but some reactions were derisive or expressed concern about social impacts.

One Twitter user said he would not allow his wife to take the wheel: “If she wants to drive she can go to her father and God willing she will drive lorries. Decisions like this depend on personal freedom #She_Won’t_Drive.”

Much of the kingdom’s overwhelmingly young population supports Prince Mohammed’s reforms, but many Saudis fear their speed could provoke a backlash from religious conservatives once seen as dominant.

Activists and diplomats have speculated that the arrests of more than a dozen women’s rights advocates over the past month were aimed at appeasing conservative elements or at sending a message to activists not to push demands too far.

The crown prince’s modernisation efforts have won praise at home and abroad, but he has also provoked unease with an anti-corruption purge last year, when scores of royals and top businessmen were detained at the Ritz-Carlton Hotel in Riyadh. Most were freed after reaching settlements with the government.

Billionaire investor Prince Alwaleed bin Talal, an early advocate of women driving who was detained at the Ritz for three months, tweeted a video of his daughter driving.

“Saudi Arabia has just entered the 21st century,” he said to his granddaughters in the back seat in the video. “Thanks to King Salman for this achievement.”

Even with the end of the driving ban, Saudi Arabia remains one of the most restrictive countries for women, who need permission from legally mandated male guardians for important decisions such as foreign travel and marriage.

Amnesty International said lifting the ban was “a small step in the right direction,” but called for an end to other practices that discriminate against women.

Activists have already begun campaigning to end the guardianship system, which has been chipped away at slowly over the years. Prince Mohammed declared in an interview earlier this year that he believes men and women are equal.

But veteran Saudi activist Hala Aldosari says women remain second-class citizens and criticised the crown prince’s “piecemeal approach” as serving the interests of the elite at the expense of women from more restrictive families.

“Worst of all will be if these small-scale reforms, and the silencing of feminists, slow the momentum for pushing the Saudi regime into making more meaningful change,” she wrote in a U.S. newspaper.