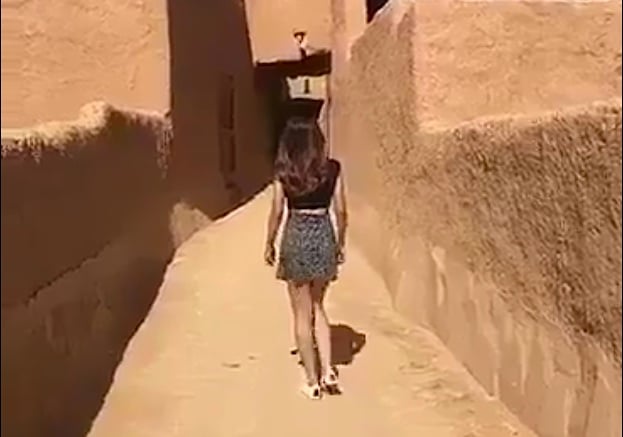 After Saudi police briefly arrested a woman who appeared in an online video wearing an “indecent” skirt and crop top, many Saudis sprang to her defence on social media on Wednesday.

Many Twitter users referred to a visit last month by President Donald Trump whose wife, Melania, and daughter Ivanka were widely praised by Saudi commentators for their elegance despite eschewing veils and wearing stylish dresses.

The Saudi woman, identified as Model Khulood, appeared on a Snapchat clip strolling through an empty mudbrick village alleyway, wearing a short skirt and a top that exposed her midriff.

The video provoked outraged commentary on social media culminating in her arrest.

Police freed the women on Tuesday evening after she told investigators that the video was posted on social media without her knowledge.

“She was released without charge and the case has been closed by the prosecutor,” a statement from the Saudi Centre for International Communications said.

Women in the ultra-conservative kingdom are bound by law to wear robes and a headscarf, are banned from driving and require consent of a male guardian for most legal actions.

But after her detention was reported by state media, many Saudis rushed to her defence.

“If she were a foreigner, they would sing about the beauty of her waist and the enchantment of her eyes. But because she is Saudi they are calling for her arrest,” Fatima al-Issa tweeted.

In a country in which debate is strictly policed and gender mixing is often illegal, social media is one of the few outlets for young Saudis to interact and comment on current affairs.

Despite the outrage over the video, Saudis have easy access to racy imagery through the internet and satellite channels.

“Why is no one asking for his trial?” Twitter user Noura Suliman asked on Wednesday.

“Everyone’s acting like a saint over just a skirt, while Hassan al-Jameel lay in Rihanna’s arms and no one said a thing. Everyone praises him for that while Saudi women are being insulted,” said another, Shajan al-Qahtani.

Others were unmoved, however, arguing that the kingdom has its own particular social codes like any other country.

“In France, the niqab (face veil) is banned and women are fined if they wear it. In Saudi Arabia, wearing robes and modest clothing is part of the kingdom’s laws,” tweeted one.