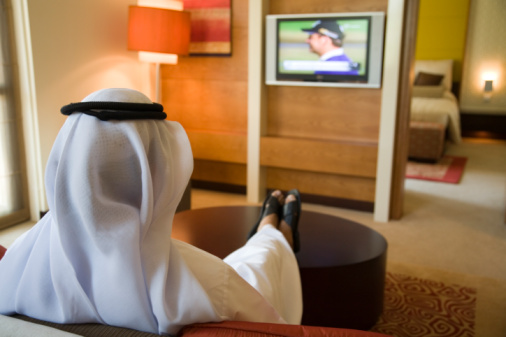 Hollywood has missed out since Saudi Arabia banned cinemas in the 1970s, but residents may soon get to see movies at home on the same day as their release elsewhere in the Gulf in a new service promised by Saudi Telecom Co (STC).

At present Saudis must wait six to nine months after films are released in cinemas in the rest of Gulf to watch them on local pay-television, while for free-to-air viewers the delay is 12 to 18 months.

Intigral has already signed agreements with a clutch of smaller distributors – Gulf Films, Front Row, Italia, Phoenicia, Falcon and the Arabic language M.A. Films – and expects to conclude a similar deal with a certain major Hollywood studio within the next few weeks.

“When one of the majors comes in, then they will all start to flow in,” said Ben Kinealy, chief executive of Intigral and prime mover behind the initiative.

The lag on films appearing on television has led Saudi Arabia, whose young tech-savvy population is the world’s top user of YouTube per capita, to become a hotbed of piracy.

“If it’s a big title it will be stolen. If it’s a smaller title it might not even be seen but that’s still lost revenue,” said Kinealy, who estimates Saudi’s lost box office earnings for film companies total about $1 billion annually.

Intigral aims to charge around $18 per film.

“Studios look at this as a ticket and a half because people will see it with their families,” said Kinealy.

Some broadcasters in other regions have experimented with one-off simultaneous cinema and television launches for certain films, but faced fierce hostility from cinemas.

That will not be a concern in Saudi, which outlawed public film screenings in the 1970s when the powerful religious establishment took a position against cinema.

Religious scholars, who believe Islam forbids any depiction of the human form, have opposed sporadic attempts over the past decade to weaken the ban.

Intigral was created in 2009 to provide the content and user interface, or programme engine, for STC’s internet-based TV services.

Domestically STC competes with Mobily, a unit of the United Arab Emirates’ Etisalat, and Zain Saudi , part-owned by Kuwait’s Zain.

“The way we will be measured is through the reduction of customer churn, ARPU (average revenue per user), pull-through of new customers and most importantly the improved consideration of STC’s brand and core products,” said Kinealy.

“When someone picks up a phone in Saudi, we want them to be looking at STC. How many people who bought an iPhone have now bought an iPad and other Apple services? It starts with one really good product.”

Kinealy sees Saudis’ prolific Internet actitivities – as of March 2013 Riyadh was the sixth most active city worldwide on Twitter, according to analysts Semiocast – as complementary to the new film service.

“It could be seen as potentially meaning these people aren’t interested in paying for a premium experience, they’re interested in getting it for free by other means,” said Kinealy. “But that argument would have stopped iTunes against Napster and who won there ?”.

STC has affiliates in Kuwait and Bahrain, plus investments in operators in Turkey, South Africa and Asia, and plans to roll out its revamped television services to these firms, he said.

“We would like to go beyond that – we’re in conversation with other telcos who are not in the family,” added Kinealy.