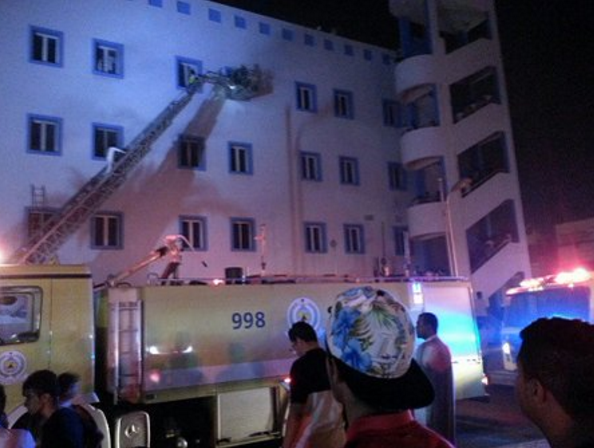 Saudi officials have confirmed that a ‘comprehensive survey’ of all healthcare facilities will be carried out following the tragic fire accident in a Jazan hospital on Thursday which left at least 24 people dead and over 140 injured.

The survey would help build confidence and trust in the public, local dailies quoted Saudi Health Minister Khalid Al Falih as saying. It will also help avoid the recurrence of incidents like the Jazan General Hospital blaze.

The ministry will also ensure that safety measures are put in place and that hospital employees are trained to handle such situations, Al Falih said.

His comments came following a visit to the Jazan hospital, where he was apprised of the damage due to the incident.

The hospital will be repaired and reopened only after making sure that it can deal with emergencies, he said.

In the meantime the kingdom’s health ministry will provide services to the patients in Jazan through other hospitals in the area, Al Falih added.

Meanwhile, a committee formed to investigate the cause of the fire is expected to submit its report soon, Arab News reported.

A source in the committee told the paper that the fire spread rapidly because of foam insulation and oxygen pipes in the ceiling.

“The space between them and the ceiling is about a metre and that led to the spread of smoke through the air conditioning vents, causing the deaths of 24 people and injuries due to smoke inhalation.”

The blaze broke out at the intensive care unit and the maternity department at around 2.30am local time on Thursday. According to reports it began on the first floor with smoke spreading to the second and third floors.

Jazan governor Mohammad bin Nasser said: “We are working together to solve all accidents in the public and private facilities…There are many reasons and we don’t want to be too quick in making a judgment, and must wait for the results of the committee.”