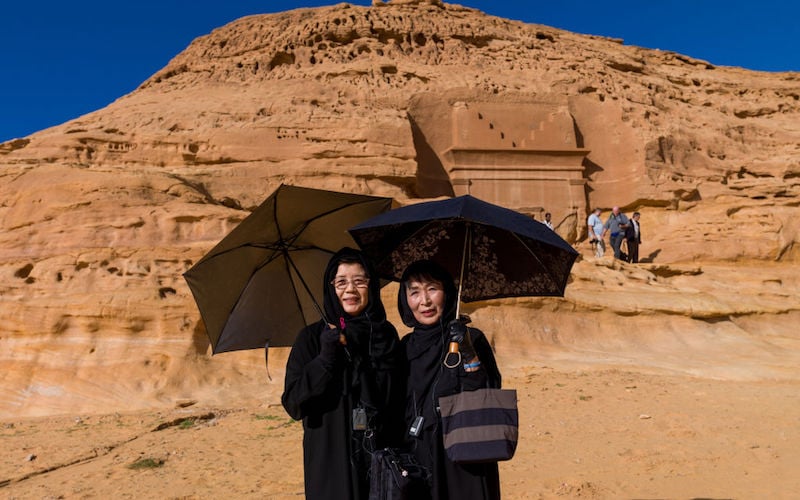 Saudi Arabia will drop its strict dress code for foreign women as it seeks for the first time to lure holidaymakers and the spending that could help develop the kingdom’s economy away from its reliance on oil.

Foreign women won’t have to wear an abaya, the flowing cloak that’s been mandatory attire for decades, though they’ll be instructed to wear “modest clothing,” said Ahmed Al-Khateeb, chairman of the Saudi Commission for Tourism and National Heritage and a key adviser to Crown Prince Mohammed bin Salman.

On Saturday, the government opened applications for online tourist visas for citizens of 49 countries, while others can apply at embassies and consulates overseas, Al-Khateeb told Bloomberg TV in Riyadh.

Saudi Arabia has long been one of the hardest countries in the world to visit, issuing visas only for business trips, religious pilgrimage or family gatherings. But in 2016 — as the oil-price rout wreaked havoc on the kingdom’s finances — the government vowed to develop tourism as part of Prince Mohammed’s economic transformation plan. Officials say it’s a promising non-oil sector that could help draw Saudi tourist dollars back home and bring in a new kind of foreign spending.

“We encourage the private sector and the investor to come and explore the massive amount of opportunity,” Al-Khateeb said, detailing plans to expand airport capacity, add hundreds of thousands of hotel rooms and develop restaurant and lifestyle offerings.

Yet opening to foreign tourists also means opening to their foreign ways — a major shift for a country where a rigid interpretation of Islam long governed all aspects of life from gender mixing to eyebrow plucking.

The kingdom has already grappled with a slew of social changes over the past few years, and some Saudis are thrilled by the transformation. But others remain deeply conservative, and the sight of foreign tourists roaming the streets of Riyadh without abayas will be controversial.

“These tourists are going to poison our society by bringing in their un-Islamic customs,” said Manal, a 35-year-old Riyadh resident who asked for her last name to be withheld so she could speak freely. “We will be exposed to sin.”

It’s also unclear how far the kingdom is willing to bend rules about alcohol and unmarried couples staying together — both banned — that could be off-putting to potential visitors. Some hotels have been told not to ask about the marital status of guests.

Plenty of Saudis are excited about the new opportunities tourism will bring.

“I can imagine how many job opportunities there will be in the tourism sector, as well as food and retail,” said Njoud Fahad, a 28-year-old travel blogger. “Society will be enriched by all the diversity of people coming in from all around the world with their culture and language.”

Al-Khateeb said the government is targeting 64 million visits by 2022 and 100 million per year by 2030 — up from 40 million today — though that includes both domestic and foreign tourists.

It’s unlikely that hordes of Western holidaymakers will flock to a country where bikinis are taboo and people brew wine illegally at home.

Saudi Arabia’s reputation abroad has also taken a hit since the murder of critic Jamal Khashoggi at the kingdom’s consulate in Istanbul a year ago.

The government also faces condemnation for its military campaign in Yemen. Yemen’s Houthi rebels frequently send ballistic missiles over the border and have injured and killed people during attacks on the airport in the southern Saudi city of Abha, a popular tourist destination. The recent escalation of tensions with Iran following an attack on key Saudi oil installations could also deter visitors.

However, the new visas could attract more adventurous travelers, particularly those who want to visit pristine islands, see little-known historical sites or explore an oft-misunderstood culture.

Tour guide Wael Alkaled, 34, said he often gets inquiries from foreigners about the photos he posts on Instagram showing off the untouched beaches and mountainous terrain of his northern region of Tabuk.

“People come to me to ask where is this place, we’d love to visit,” he said. “The launch of the tourist visa will create different work opportunities and more business.”

Al-Khateeb said he believes Saudis will embrace the influx of tourists.

“We have hundreds of thousands of Saudi students who studied outside and came back, and we welcome different cultures, different religions,” he said. “We are a very welcoming nation.”

He pointed out that the country has already gone through massive changes over the past few years, including an end to a ban on women driving and the introduction of cinemas and mixed-gender concerts.

“If you disagree with something, you have the right not to go for it or not to visit,” Al-Khateeb said. “Today most of the changes are behind us.”

Asked if Saudi women will be allowed to go out without abayas, he declined to comment. “Until now we’re not discussing this because it has never been a problem,” he said. “It is part of our culture.”

While abayas will be optional for foreign visitors and residents, they will be subject to rules requiring modest dress, he added.

Asked about potentially conflicting rulings from religious clerics, who for years had a major influence on government policy, he said: “The dress code will be published by the government and the government is the highest authority.”

“What the tourists can see here in Saudi Arabia and explore is the culture — the strong and great culture that we have,” said Al-Khateeb. “We remain authentic.”