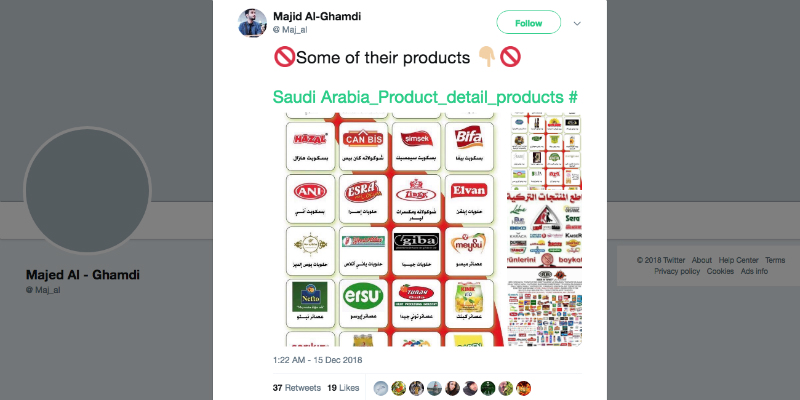 Saudis have taken to social media to call for a boycott of Turkish products in response to what they describe as a Turkish campaign against the kingdom.

The hashtags #Saudis_rejecting_the_Turkish_Products and #No_to_Turkey_Travel_and_products seek to encourage consumers to look at the origin of items in grocery scores and reject those with a ‘made in Turkey’ tag, according to Al Arabiya.

They come in response to what users consider to be Turkish interference in the kingdom’s affairs.

Relations between the two countries, which had already soured after Turkey sided with Qatar during a Saudi-led boycott of the country, have taken a further turn for the worse since October when journalist Jamal Khashoggi was murdered at the kingdom’s Istanbul consulate.

In the wake of the killing, Turkish officials leaked theories on the death to the press, including the names and photos of Saudi nationals the country’s security forces believed were involved.

They also claimed to have audio recordings of the Washington Post columnist’s final moments.

“Since our country is being fiercely attacked by Erdogan’s official media and Erdogan’s provocative statements; our national duty urges us to boycott any Turkish product as a response to these repeated offenses,” one social media user said, according to the publication.

A number of accounts posting tweets on the subject appeared to have the kingdom’s Crown Prince Mohammed bin Salman included in their profile picture.

#No_to_Turkey_Travel_and_products
Because of the actions of Turkish President Recep Tayyip Erdogan the direction of Saudi Arabia and its attempt to discredit the world and the Muslim world in particular we will boycott Turkish tourism and Turkish products a victory for our grea pic.twitter.com/bBH2wt9cV9