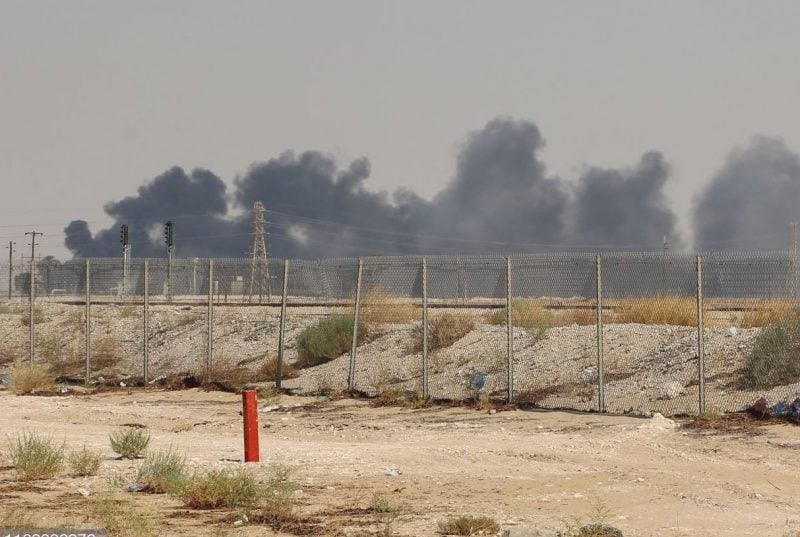 Saudi Arabia said preliminary findings show Iranian weapons were used in the attack on one of its key oil installations, but stopped short of directly blaming the Islamic Republic for the strikes that cut its crude output by half and rattled oil markets.

Ongoing investigations of “debris and wreckage” show “it belongs to the Iranian regime,” Turki al-Maliki, a spokesman for the Saudi-led coalition in Yemen, told reporters in Riyadh on Monday. He said initial findings suggest the attack was not launched from Yemen, contradicting claims by Iranian-backed Houthi rebels that they carried out the attack using a swarm of long-range drones with more sophisticated engines.

“We are working right now to spot the launch point of those attacks,” he said.

Saturday’s attacks caused an unprecedented surge in oil prices and cast a shadow over preparations for the sale of a stake in Saudi Aramco that could be the world’s biggest initial public offering.

While President Donald Trump hasn’t directly blamed Iran for the attacks, Secretary of State Michael Pompeo has. Two US officials said the location of the damage and weapons used suggest the attack was not launched by the Houthis, who have been fighting the Saudi-led coalition in Yemen for four bruising years.

Al-Maliki said evidence of Iranian involvement would be released, without saying when. Iran denied involvement.

“Accusing Iran of the attacks is in line with the US’s maximum-lies policy,” said Abbas Mousavi, spokesman at the foreign ministry in Tehran. “Such accusations are unsurprising, unacceptable and baseless.”

Russia, a leading Iranian ally in the Middle East, called on countries not to rush to conclusions over who was responsible, Kremlin spokesman Dmitry Peskov said.

In a tweet on Monday, Trump cast doubt on Iran’s denials of responsibility, citing the Islamic Republic’s claim that a US drone shot down over the Gulf in June was actually over Iranian waters.

“Remember when Iran shot down a drone, saying knowingly that it was in their “airspace” when, in fact, it was nowhere close,” Trump wrote. “They stuck strongly to that story knowing that it was a very big lie. Now they say that they had nothing to do with the attack on Saudi Arabia. We’ll see?”

During that incident, Trump said he called off a retaliatory military strike on Iran at the last minute, after learning about potential casualties that he said would be out of proportion to the destruction of a US drone.

Yet over the weekend Trump raised the specter of a military confrontation with Iran, saying that the U.S. is “locked and loaded depending on verification” that Tehran staged the attack. He then said he’d wait for Saudi comments on who was responsible.

There were a total of 19 impact points at the world’s biggest crude-processing facility at Abqaiq and at an oil field in Khurais, and equipment used in the incidents that’s been recovered so far was inconsistent with the Houthi claims, the U.S. officials said. The Houthis had said they used unmanned aerial vehicles in the attack.

Oil posted its biggest ever intraday jump, briefly surging above $71 a barrel after the strike removed about 5 per cent of global supplies and raised the specter of more destabilisation in the region.

The US president promised to help allies following the attacks, saying he’d do so despite America not being as reliant on Middle East oil. The crisis comes as Trump’s White House operates without a national security adviser. John Bolton, who had the post, was dismissed last week.

The Houthis on Monday said oil installations in Saudi Arabia remained a target for weapons that could reach anywhere in the kingdom.

“We assure the Saudi regime that our long hand can reach wherever we want, and whenever we want,” Houthi spokesman Yahya Saree said in a statement. “We warn companies and foreigners not to be present in the facilities that were hit in the strikes because they are still within range and may be targeted at any moment.”

The Trump administration and Saudi leaders now face a difficult choice in how to respond to Iran or its proxies without triggering a broader conflict that could spiral out of control with potentially devastating consequences for global oil markets and the world economy. Neither country has tipped its hand.

Trump will “be quite reluctant to start a war with Iran over Saudi Arabia,” said Ali Vaez, Iran Project Director at the International Crisis Group. “But Iran has increasingly less to lose and so is becoming less risk averse which means Trump’s policy of maximum pressure has backfired. At this stage, if there were a direct retaliation against Iran, the Iranians would find the draw of retaliation irresistible and we could enter a tit-for-tat situation that could easily spiral.”

Trump officials had recently floated the idea of talks between the president and his Iranian counterpart Hassan Rouhani at the United Nations General Assembly this month, after more than a year of escalating tensions between the two countries following the U.S. withdrawal from the 2015 nuclear deal.

Mousavi on Monday confirmed Rouhani would travel to New York, but said he had “no plans” to meet Trump. Iran has consistently said that no progress was likely in improving ties without the U.S. first removing sanctions on Iranian oil exports.

While analysts estimate Saudi Arabia may be able to restore half of the lost production as early as Monday, Trump said on Twitter Sunday that he’s authorised the release of oil from the Strategic Petroleum Reserve if needed “in a to-be-determined amount sufficient to keep the markets well-supplied.”

The stock of about 645 million barrels of crude and petroleum products could help meet demand during the time it would take for the Saudis to repair the facilities. Trump also told U.S. agencies to expedite permitting approvals of oil pipelines.