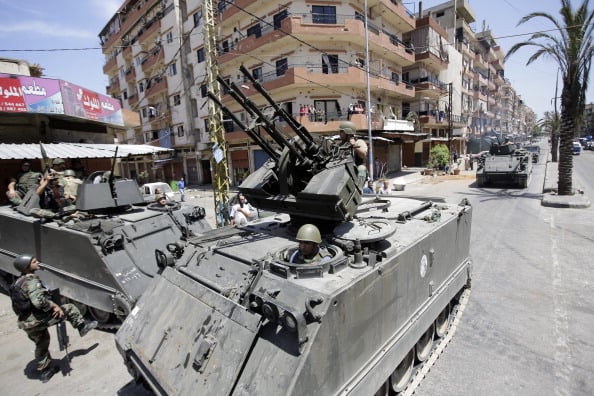 For the kingdom’s Sunni ruling princes, that fear, revealed in a 2009 U.S. embassy cable released by WikiLeaks, now focuses on Syria. Iran-backed President Bashar al-Assad’s forces are advancing with the aid of Lebanese Hezbollah Shi’ite fighters, while Riyadh supports the Sunni rebels fighting against him.

It is a war increasingly seen in Riyadh as the fulcrum of a wider geopolitical struggle with Iran, a country it believes is radical, expansionist and militant, and a potential threat to Saudi Arabia itself.

“If the Syrian government wins, it will prove to other Arab countries that Iran is able to protect its allies in the region. This will undermine Western alliances and Western allies,” said Abdulaziz al-Sager, head of the Gulf Research Centre in Jeddah.

Since the fall of Syrian rebel stronghold Qusair this month, there has been growing unease in Saudi Arabia’s dusty capital Riyadh about the opposition’s chances.

Riyadh has been backing the mainly Sunni rebels with arms, money and political support, while Western countries, above all the United States, have given mixed signals, calling for Assad’s downfall but refusing so far to send arms or use force.

The Western position changed dramatically last week when U.S. President Barack Obama signalled that Washington would arm the rebels. But he has not yet explained how or when that might begin, and Saudis are still sceptical of Western support.

Two months ago, Saudi Arabia expanded its own weapons supply to include anti-aircraft missiles, a Gulf source said, adding that the world’s top oil exporter had started taking a more active role in the conflict.

While more Saudi-supplied weaponry is likely headed to the Syrian opposition, there is a growing view among senior Saudis that it is no longer enough to just give the rebels arms and advice, diplomats in the Gulf say.

“They’ve been saying for a while the international community is not doing enough in Syria but they thought the opposition could manage. They are really worried about the attitude in Washington,” said one diplomatic source in the Gulf.

So worrying is the situation, as seen in Riyadh, that King Abdullah cut short his summer leave in Morocco to fly home on Friday, warning of the “repercussions of events in the region”. The suggestion of concern prompted a sharp drop in Saudi stocks.

Influential Saudi commentator Jamal Khashoggi, in an article for newspaper al-Hayat, painted what for Saudis is a frightening picture of the Gulf after an Assad victory. Iran would threaten Saudi security and angry Sunni youth would respond by turning to al Qaeda, the militant network that is as hostile to Shi’ites as it is to the West.

“A nightmare, don’t you think?” he wrote.

Since Hezbollah started to trumpet its involvement in Syria, Sunni clerics, including some from Saudi Arabia, have used increasingly sectarian rhetoric in their attacks on Assad.

Yet while Saudi Arabia’s official Wahhabi school of Islam sees Shi’ites as heretical, the kingdom’s rulers also see sectarian language as potentially dangerous, said one diplomatic source in the Gulf.

They believe openly sectarian rhetoric can backfire by helping mobilise Shi’ites in support of Assad as much as it fires up the rebellion. Worse still, it alienates potential backers in the West and draws Sunni militants to the conflict that can later pose a threat to Riyadh.

Throughout the rebellion, Saudi Arabia has feared a repeat of previous conflicts in Iraq and Afghanistan when large numbers of Saudis joined what they saw as a jihad only to return to the kingdom and take up arms against the government.

Saudi officials have repeatedly warned that citizens who go to fight face prison upon their return, and have tried to funnel charitable donations for Syria through state channels to avoid cash going to militant groups.

While some Saudis, including Khashoggi, are calling for the kingdom to take tougher independent action against Assad, diplomats in the Gulf say its role is constrained by its limited capacity for sustained military action.

Although the Saudi airforce is well equipped, it performed poorly in a brief border war with a Yemeni rebel group in 2010, U.S. embassy cables released by WikiLeaks said at the time.

And, while Saudi forces engaged Iraq’s army in the 1991 Gulf War, they fought only on Saudi soil. Striking an Arab, Muslim country is problematic for the birthplace of Islam, which aims to be perceived as neutral custodian of Islam’s holy places.

With limits on what it can do itself, it needs Washington to help fight its battles.

The desire to push Washington to take a bigger role contributed to a recent flurry of diplomatic activity, as Prince Saud and Prince Bandar travelled to Paris for top-level meetings.

However Riyadh is well aware of the difficulty of persuading Obama to be tougher while Syrian rebels remain fractured and their strongest units are so ideologically militant. That means playing down the struggle’s sectarian side.

“You need to reduce the political risk to Obama, and that means repositioning the opposition as humanitarian, rather than Islamist. It’s difficult,” said a diplomatic source.