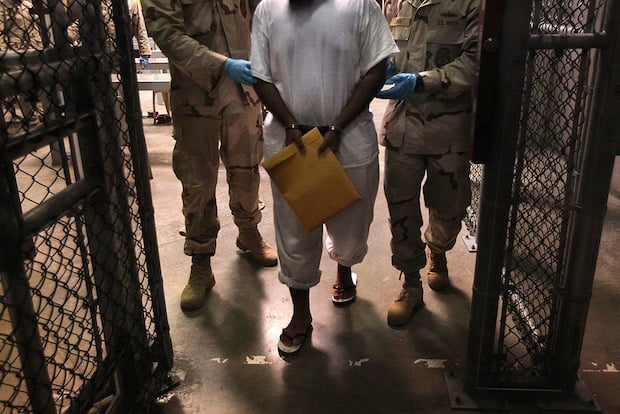 Saudi Arabia has confirmed the arrival of a citizen detained in United States military jail Guantanamo Bay, the first prisoner transfer from the facility since President Donald Trump took office.

Ahmed al Darbi will serve out the rest of his 13-year sentence in the kingdom.

The 43-year-old, who was a brother-in-law to one of the Saudi plane hijackers in the September 11, 2001 terror attacks on the US, was captured in Baku, Azerbaijan and handed over to the US military in Afghanistan in 2002.

He pleaded guilty to war crimes in 2014 related to the 2002 bombing of an oil tanker off Yemen and also acted as a prosecution witness to identify members of Al-Qaeda leader Osama bin Ladin’s inner circle.

Darbi testified that he had been tortured during his time in US custody, including through solitary confinement, sleep deprivation, the denial of toilet breaks and being stung up from a door in shackles.

Western media described how one US soldier was later court martialled after pulling out his penis and placing it close to Darbi’s face during an interrogation.

Saudi Press Agency said “Ahmed bin Mohammed bin Ahmed al-Derbi” arrived in the kingdom at 11:55pm on Wednesday night “where his family was informed of the arrival” and provided facilities to meet him.

“He will be subject to the regulations in the kingdom, which includes the benefit of the programmes of the Mohammed bin Nayef Center for Counseling and Care,” a spokesperson told the press agency.

The centre, located on a former resort complex, is used to re-integrate former jihadists into Saudi society.

Under the former president Guantanamo’s prisoner population declined from 242 to 41.

Trump has vowed to keep the facility, which still houses 40 detainees, open and signed an order to that effect in January.

He hinted that ISIL or Al Qaeda fighters could be added to the prison population.

The Pentagon said on Wednesday it updated its guidance on criteria for transferring new detainees to Guantanamo Bay, according to Reuters.

“This policy provides our warfighters guidance on nominating detainees for transfer to Guantanamo detention should that person present a continuing, significant threat to the security of the United States,” Pentagon spokesperson commander Sarah Higgins said.

US defence secretary Jim Mattis told reporters on Monday that there were more than 400 foreign fighters being held by American-backed forces in Syria.