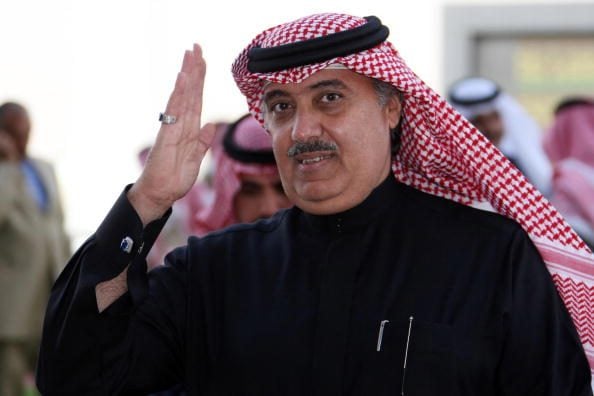 Senior Saudi Prince Miteb bin Abdullah, once seen as a leading contender to the throne, was freed after reaching an “acceptable settlement agreement” with authorities, paying more than $1bn, a Saudi official said on Wednesday.

Miteb, 65, son of the late King Abdullah and former head of the elite National Guard, was among dozens of royal family members, ministers and senior officials who were rounded up in a graft inquiry partly aimed at strengthening the power of Crown Prince Mohammed bin Salman.

The official, who is involved in the anti-corruption campaign, said Miteb was released on Tuesday after reaching “an acceptable settlement agreement”. The amount of the settlement was not disclosed but the official said it is believed to be the equivalent of more than $1bn.

“It is understood that the settlement included admitting corruption involving known cases,” the official said. According to a Saudi official, Prince Miteb was accused of embezzlement, hiring ghost employees and awarding contracts to his own firms including a $10bn deal for walkie talkies and bulletproof military gear worth billions of Saudi riyals.

The allegations against the others included kickbacks, inflating government contracts, extortion and bribery.

The claims could not be independently verified.

Saudi authorities had been working on striking agreements with some of those in detention, asking them to hand over assets and cash in return for their freedom.

News of the purge emerged on November 4 soon after King Salman decreed the creation of an anti-corruption committee led by Crown Prince Mohammed bin Salman, his 32-year-old son who has amassed power since his meteoric rise three years ago.

The new body was given broad powers to investigate cases, issue arrest warrants and travel restrictions, and seize assets.

In an interview with the New York Times published last week, Crown Prince Mohammed bin Salman, was quoted as saying that the vast majority of about 200 businessmen and officials implicated in the crackdown were agreeing to settlements under which they would hand assets over to the government.

Apart from Miteb, the Saudi official said that at least three other people allegedly involved in corruption cases have also finalised settlement agreements.

He said the Public Prosecutor had also decided to release a number of individuals and to prosecute at least five individuals. The official gave no details on their identities.

The authorities have not revealed detailed charges against any of the detainees. It was also unclear if Miteb was able to move freely or whether he would be put under house arrest. Officials from Miteb’s office could not immediately be reached for a comment about his release. An acquaintance of the family has said earlier on his twitter account that Miteb was receiving brothers and sons at his palace in Riyadh.

The arrest of royals and top business elite capped a frenetic almost three years of growing power by the Crown Prince. It was seen as another pre-emptive step to remove powerful figures as he exerts control over the world’s leading oil exporter.

The roundup recalled the meticulously planned palace coup in June through which Mohammed bin Salman ousted his elder cousin, Mohammed bin Nayef, as heir to the throne, interior minister and veteran head of the kingdom’s formidable security apparatus.

In September, he rounded up and jailed religious and intellectual opponents.

This month’s purge was another carefully planned swoop on 11 princes, four serving ministers, dozens of former ministers and officials, and tycoons including the kingdom’s best-known businessman, Prince Alwaleeed bin Talal, who owns high-profile stakes in global companies like Citigroup and Twitter. They were held at the five-star Ritz-Carlton hotel in Riyadh. Yet many observers believe the primary target of the purge was Prince Miteb, overlord of Saudi Arabia’s 100,000-strong National Guard, as he represented the last great power centre left standing after the toppling of former Crown Prince Mohammed bin Nayef.

By launching a war on corruption Mohammed bin Salman combined a popular cause with the elimination of perhaps the last obstacles between him and the throne.

As the Sandhurst-trained preferred son of the late King Abdullah, Miteb was once thought to be a leading contender to the throne.

Before he was sacked by a royal decree on November 4, he headed the Saudi National Guard, a pivotal power base rooted in the kingdom’s tribes that was run by his father for five decades.

He was also the last remaining member of Abdullah’s Shammar branch of the family to retain a key position at the top of the Saudi power structure, after brothers Mishaal and Turki were relieved of their posts as governors in 2015.