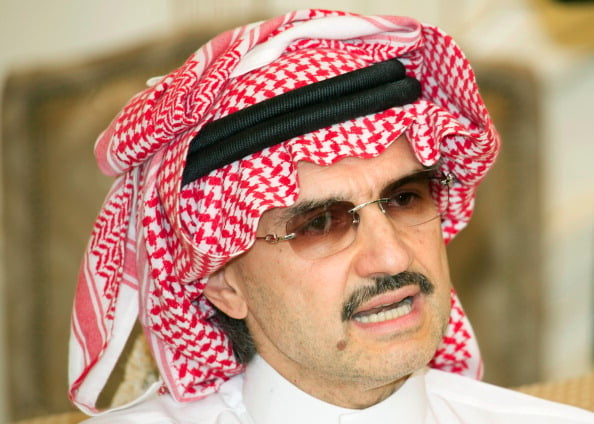 Saudi billionaire Prince Alwaleed bin Talal said the world’s top oil exporter should start worrying about the recent slide in global oil prices and warned against the negative effect of such a drop on the state revenue.

In an open letter to Oil Minister Ali al-Naimi and other ministers, dated Oct. 13, Prince Alwaleed said he was “astonished” about comments reportedly made by Naimi aiming “to alleviate the substantial negative implications on the Saudi budget and economy due to the big drop in oil prices”.

He was referring to comments made by the oil minister in Kuwait on Sept. 11 where he played down concerns about the drop in oil prices below $100 per barrel.

Brent crude oil was trading just above $88 a barrel on Tuesday – its lowest in almost four years – as expectations faded that OPEC could cut output in an effort to shore up prices and curb the emerging oil glut.

Last week, Saudi officials briefed oil market participants in New York on the Kingdom’s policy, making clear that Saudi is prepared to tolerate a period of lower prices – perhaps as low as $80 a barrel – in order to retain market share, Reuters reported on Monday.

The global oil benchmark has declined more than 20 per cent from a 2014 high in June of $115 per barrel as supplies rose and demand slowed in the United States, Europe and China.

Prince Alwaleed has repeated previous warnings that the Gulf Arab Kingdom needed to reduce its reliance on crude oil and diversify its revenues.

He said in the letter, posted on his Twitter account on Monday, that the Kingdom’s budget this year and in 2015 could incur losses worth billions of riyals.

But his warning may reflect growing concern in private among many Saudis about the impact of declining oil prices on the country’s economy and its dependence on oil revenues.

“Ninety per cent of the 2014 budget is based on it (oil), so to underestimate (these implications) is in itself a disaster which cannot pass unnoticed,” he wrote in the letter.

Over the past couple of years the Saudi government has taken some initial steps to develop the economy beyond oil – for example, liberalising the aviation sector and providing finance to small, entrepreneurial firms in the services and technology sectors.

Naimi has said in the past that Saudi Arabia must reduce its reliance on crude oil revenues and develop its downstream industry to shield its economy from international market volatility.

The average oil price for most of this year is around $106 a barrel, and even the recent drop in oil prices is unlikely to put the Kingdom under pressure because of the financial reserves it has built over the years.

The IMF said in a report last month that Saudi Arabia’s state finances could fall into the red next year and the country might start running down its foreign reserves if it did not rein in the growth of government spending.

However, running deficits would not be disastrous for the government. Economists believe that in addition to using its reserves, which could help to maintain spending at current levels for years, Saudi Arabia could easily borrow money from the markets, as most other governments around the world do. State debt fell to 2.7 per cent of GDP in 2013, one of the lowest levels in the world.

Saudi Arabia’s $748 billion economy, the biggest in the Arab world, is expected to expand by 4.2 per cent this year and by 4.3 per cent next, according to the consensus of 18 analysts polled by Reuters in late September.