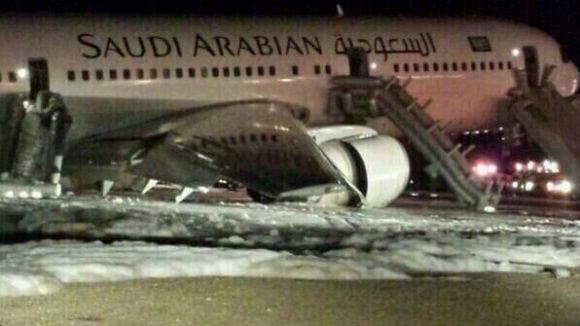 Twenty nine people were injured when a Saudi Arabian Airlines (Saudia) Boeing 767-300ER made an emergency landing at Medina airport in the west of the country early on Sunday, the General Authority of Civil Aviation said.

It said 18 of the injured were treated at the airport while 11 were taken to hospital. A spokesman for Saudi Arabian Airlines, who did not give his name, said three people were seriously injured.

The flight, arriving from Mashhad in Iran before dawn, was carrying 315 passengers and suffered a technical malfunction, the authority said. It said the pilot had reported a problem with a rear wheel.

A witness at Medina airport, speaking anonymously because he was not authorised to talk to media, said the plane landed after making two unsuccessful attempts.

The Saudia spokesman said the plane was leased from another company.

“Boeing is aware of reports of the accident and is gathering more information,” the company said.

Photographs and video footage posted online showed the plane on the runway with damage to its right wing. The Saudia spokesman verified the authenticity of the images.

State-owned Saudia is the national carrier of Saudi Arabia. It is in the process of splitting into different units that will eventually be partly privatised.