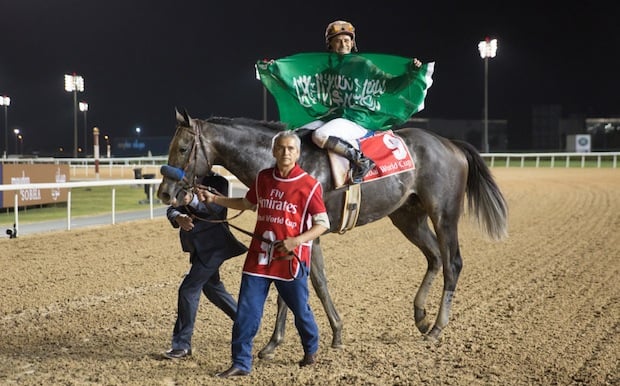 Arrogate, ridden by Mike Smith, came back from a shaky start to sprint to victory in the $10m Dubai World Cup on Saturday, beating Gun Runner in the world’s second-richest horse race.

Trained by Bob Baffert, the odds-on favourite made a dramatic comeback in the 2,000-metre contest after breaking from the stalls at the back of the pack.

“It was like watching Seabiscuit or something. It was a Hollywood-type finish,” Baffert told reporters at the 60,000-capacity Meydan racecourse.

Neolithic came third of the 14 runners in the contest, which was the world’s richest horse race until being surpassed by Florida’s $12m Pegasus World Cup earlier this year.

Smith rode off the track after the win with the Saudi flag of owner Prince Khalid bin Abdullah draped around his shoulders.

“Once we got away like that and got squeezed leaving there, I had no choice but to just sit there and let him collect himself,” Smith said.