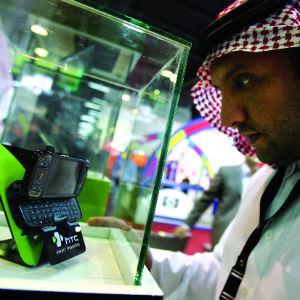 Freeing up preferred spectrum for Saudi Arabia’s telecoms operators to use for next-generation networks could add $95.5 billion to the economy by 2025, global telecoms lobby group GSMA said.

Failure to do so will lead to a network crunch and hurt Saudi attempts to diversify its economy away from oil, Peter Lyons, GSMA director of spectrum policy for Middle East and Africa, told Reuters in a telephone interview on Monday.

“The spectrum Saudi has allocated up until now has been sufficient and they have done very well in terms of 3G and data subscriber growth,” Lyons said.

“The spectrum set aside for LTE is simply not sufficient to satisfy demand. They are getting to hit a wall very quickly and we are already seeing some issues on the network.”

Lyons wants the Saudi government to harmonise that which is allocated to telecoms operators with international norms.

“In Saudi right now, there are no smart phones or tablets that can use 4G spectrum because what they have deployed is a unique configuration that is only being used in Saudi Arabia. All they have is dongles for laptops.”

Saudis will be forced to use higher-cost, lower-performing devices, the GSMA said, while spectrum fragmentation means telecoms operators must use a less efficient version of LTE.

“If they were to have harmonised spectrum and use these international-standard bands they would be able to support a much higher throughput of traffic,” said Lyons.

Optimistic forecasts predict Saudi spectrum harmonisation in 2015, Lyons said, adding this could be delayed until 2018.

The lower frequency 800 mhz band travels further and can better penetrate buildings, meaning operators need build fewer towers to cover rural areas, while the higher frequency 2.6 GHz has a greater carrying capacity and so is suited to high population areas.