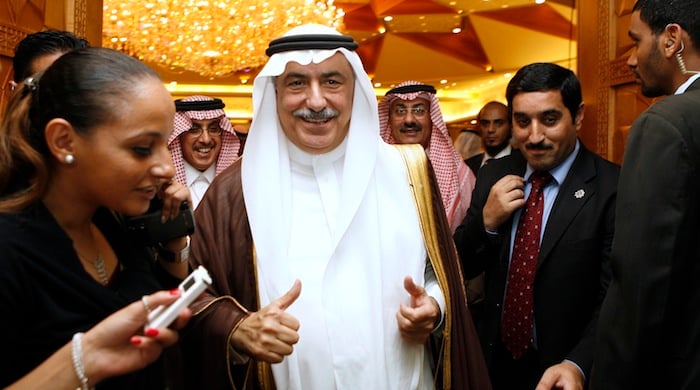 Saudi Arabia’s Finance Ministry will discuss with the central bank its options for financing the large state budget deficit expected next year, and may cover some of the shortfall with borrowing, Finance Minister Ibrahim Alassaf said.

Responding to the plunge of oil prices, the ministry announced on Thursday a 2015 budget plan which envisions a deficit of SAR145 billion ($38.7 billion).

A ministry statement said the government could cover the deficit with its huge fiscal reserves, but Alassaf told Al Arabiya television late on Thursday that borrowing might also be used.

“There is also a chance to borrow at good rates – this topic will be discussed with colleagues at the Saudi Arabian Monetary Agency at the appropriate time,” he said.

Alassaf did not elaborate on the types of borrowing which might be used. Although Saudi state-run agencies and state-owned firms have occasionally issued foreign- and local-currency bonds in recent years, the government itself has not, preferring to pay down its debt.

The minister noted that Saudi Arabia’s public debt had dropped to SAR44 billion or about 1.6 per cent of gross domestic product, which would make it easy to borrow. Both state-run and private financial institutions have big resources from which the government could borrow, he added.

Alassaf said next year’s budget deficit would be slightly more than four per cent of GDP, which he called low under current global conditions. Saudi Arabia did not reveal the oil price assumed in its 2015 budget, but analysts estimate it was about $55 a barrel or slightly higher; Brent crude oil is now at $60.

In past budgets, the government made very conservative assumptions for oil revenues, resulting in much higher-than-projected revenues at the end of each year. That is unlikely to happen with the 2015 budget, Alassaf said.

“We were realistic in our estimates for next year’s revenues in light of current and expected developments in the oil market. Maybe over the past years I agree we were conservative, but this year we were realistic,” he said.

The ministry said on Thursday that Saudi Arabia’s inflation-adjusted GDP grew an estimated 3.6 per cent this year, up from 2.7 per cent in 2013. Alassaf said those calculations used the base year of 2010, when the oil sector’s contribution to the economy was unusually high.

If the calculations had used 1999 for the base year, as the government did previously, growth in 2014 would have come in at 4.1 per cent, Alassaf said.

He called that rate healthy and said it was expected to be maintained next year. Private sector growth was estimated at 5.7 per cent this year, showing the government’s efforts to diversify the economy beyond oil are on track, he added.