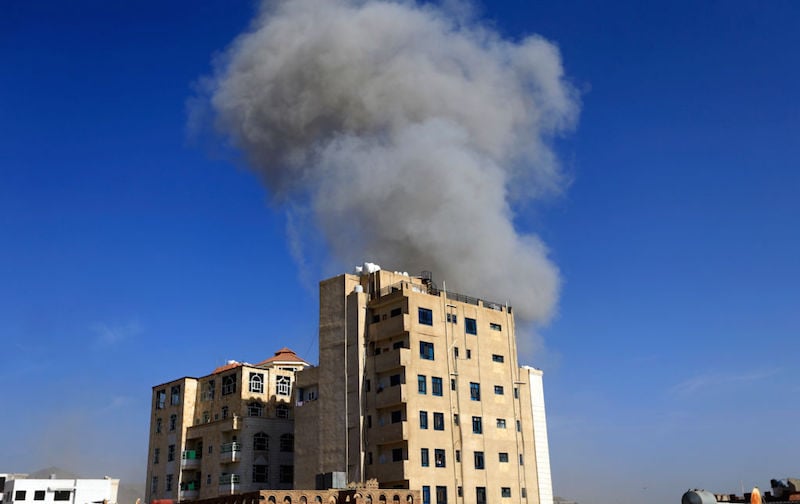 The Saudi-led military coalition in Yemen carried out several air strikes on the Houthi-held capital Sanaa on Thursday after the Iranian-aligned movement claimed responsibility for drone attacks on Saudi oil installations.

The Sanaa strikes targeted nine military sites in and around the city, residents told Reuters.

A coalition statement carried by Saudi-owned Al Arabiya TV, said the alliance struck military bases and facilities and weapons storage sites with the aim of “neutralising the ability of the Houthi militia to carry out acts of aggression”.

“The sorties achieved its goals with full precision,” the coalition said. It had urged civilians to avoid those targets.

Sanaa has been held by the Houthi movement since it ousted the internationally recognised government of Abd-Rabbu Mansour Hadi from power there in late 2014. The coalition has previously targeted suspected drone and missile storage sites in the city.

The Houthis said they were responsible for the attack, which did not disrupt oil output or exports. The group denies being a puppet of Tehran and says its revolution is against corruption.

“The terrorist acts, ordered by the regime in Tehran and carried out by the Houthis, are tightening the noose around the ongoing political efforts,” Prince Khalid bin Salman tweeted.

The coalition described the drone attack as a “war crime”.

Saudi Arabia and the United Arab Emirates say the Houthis smuggle Iranian weapons, including missiles that have been launched at Saudi cities. The group and Tehran deny the charges.

The UAE said on Wednesday that the Western-backed coalition, of which it is a main member, would “retaliate hard” for any Houthi attacks on coalition targets.

The Sanaa air strikes and renewed fighting in Yemen’s Hodeidah port that breached a U.N.-sponsored truce in the Red Sea city, could complicate peace efforts to end the four-year war that has killed tens of thousands of people, many of them civilians, and pushed the country to the brink of famine.

The coalition, which receives arms and intelligence from Western nations, intervened in Yemen in 2015 to try to restore Hadi’s Aden-based government.

The warring parties agreed last December at U.N.-sponsored peace talks on a ceasefire and troop withdrawal deal in Hodeidah, a lifeline for millions of Yemenis that became the focus of the war last year.

The pact, the first major breakthrough in over four years, stalled for months amid deep suspicion among all parties, but special envoy Martin Griffiths secured some progress when the Houthis started withdrawing from three ports last Saturday.

Pro-coalition troops are expected to pull back as well under the deal once the two sides work out details for a broader phase two redeployment in Hodeidah, the main entry point for Yemen’s commercial and aid imports and the Houthis’ key supply line.