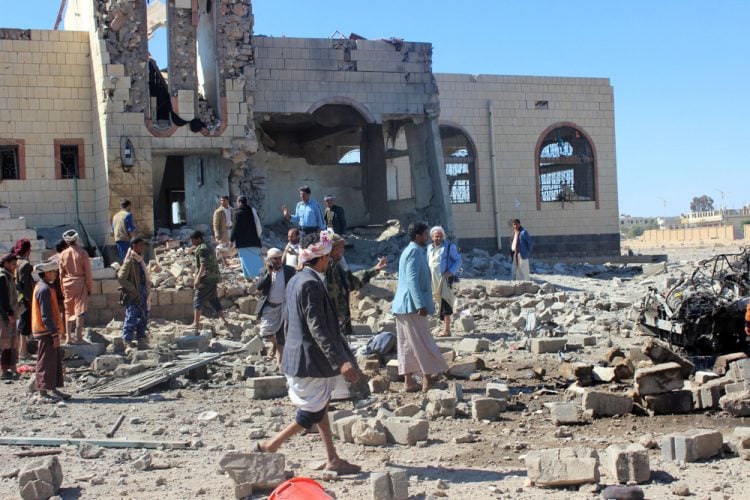 A military coalition led by Saudi Arabia said on Monday it would commit $1.5bn in new humanitarian aid for Yemen, where it is supporting the internationally recognised government against Iran-aligned Houthis in a three-year-old civil war.

The announcement comes as Saudi Arabia and its allies face mounting criticism – including from the United States – over the civilian toll of Yemen’s conflict, in which more than 10,000 people have been killed by coalition air strikes and by fighting on the ground.

The US-backed alliance, which includes the United Arab Emirates, said it had already completed the first aid flight of a new air bridge to the central city of Marib and had set up 17 overland corridors for aid shipments.

It also plans to install four cranes in three southern ports held by the government to boost the flow of imports, coalition officials told a news conference in Riyadh.

“We are backing a professionally planned and detailed humanitarian mission with military power and precision to guarantee that the humanitarian aid reaches the people who need it to lift their suffering,” said spokesman Colonel Turki al-Malki.

Yemen is the world’s worst humanitarian crisis, where 8.3 million people are entirely dependent on external food aid and 400,000 children suffer from severe acute malnutrition, a potentially lethal condition, according to the United Nations.

Saudi Arabia and its allies back the government of President Abd-Rabbu Mansour Hadi based in the south against the Iran-aligned Houthi movement, which controls the capital Sanaa.

The coalition has already pumped billions of dollars worth of aid into Yemen, yet the war has still cut food deliveries by more than half and pushed the Arabian Peninsula’s poorest country to the edge of famine, with outbreaks of cholera and diphtheria.

Al-Malki said the coalition would extend by another month its permission for commercial ships to dock at Hodeidah, a Houthi-held port on the Red Sea that is the country’s main entrepot for food.

Saudi-led forces shut off the port on November 6 to stop an alleged flow of arms to the Houthis from Iran. The action came after Saudi Arabia intercepted a missile fired toward its capital Riyadh. Iran has denied supplying arms to the Houthis.

Malki added that after coalition talks with a UN body tasked with inspecting Yemen-bound ships and Djibouti, the United Nations would now be able to search for possible weapons all such vessels in the port of the Horn of Africa nation.

Last week, Saudi Arabia deposited $2bn in Yemen’s central bank after the Yemeni prime minister made a public plea for funds to prop up the currency and help stave off hunger.

The coalition, under international pressure, eased a three-week blockade imposed on Yemeni ports and airports in November following a ballistic missile fired by the Houthis towards Riyadh.

US President Donald Trump last month urged Saudi Arabia to immediately allow humanitarian aid to reach the Yemeni people, suggesting Washington had run out of patience with the blockade.

The war’s heavy toll on civilians has long been a sore point with members of Congress, triggering threats to block U.S. assistance to the coalition including refuelling of jets and limited intelligence support.

On Monday residents in northern Yemen reported the deaths of nine people, including five children and a pregnant woman, in the latest rash of coalition airstrikes.