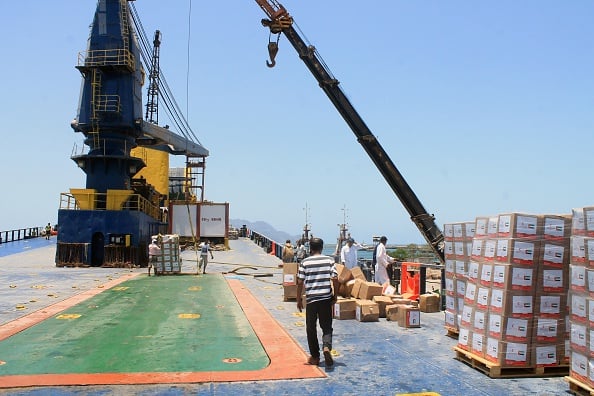 The witness said explosions could be heard near the southern city’s airport and the districts of Khor Maksar and Crater shortly the five-day ceasefire expired on Sunday at 2000 GMT. No further details were immediately available.

Late on Sunday a spokesman for the army, much of which is allied to the Houthis, welcomed a request by the U.N. envoy to Yemen to extend the truce to allow more aid to be delivered to the war-damaged Arabian Peninsula country.

“We welcome the call by the UN envoy to Yemen … regarding the extension of the truce and the need to deliver humanitarian aid to citizens,” Yemen’s Houthi-controlled state news agency SABA quoted Brigadier General Sharaf Luqman as saying.

Mauritanian diplomat Ismail Ould Cheikh Ahmed made his appeal at the opening of a conference of Yemeni parties that convened in the Saudi capital Riyadh to discuss ways of ending Yemen’s political turmoil.

Since Tuesday Saudi-led forces and Yemen’s Houthi militias had largely observed a ceasefire meant to allow delivery of food, fuel and medical supplies to millions of Yemenis caught in the conflict since the alliance began air strikes on March 26.

Sporadic clashes had continued, however, with at least 15 killed overnight Saturday-Sunday in the cities of Taiz and Dhalea, residents said.

Relief groups say that the five days were hardly enough to allow sufficient supplies to reach the country of 25 million.

Impoverished and strife-torn even before the war, Yemen is now mired in a humanitarian catastrophe, as 300,000 people have been displaced by the conflict and 12 million are short of food.

“I am hopeful (there will be an extension),” Ould Cheikh Ahmed told journalists on the sidelines of the conference, attended by President Abd-Rabbu Mansour Hadi. “All my first contacts indicate that we have a chance, but I am really calling on all parties to extend this for a minimum of five days.”

Saudi Arabia has said that extending the truce depended on how the Houthis and their ally, former President Ali Abdullah Saleh, complied with the ceasefire.

The world’s top oil exporter has accused the Houthis of violating the truce but said it would exercise self-restraint to allow the delivery of badly needed supplies to Yemenis.

Yemeni Vice President Khaled Bahah, who also heads the government in exile, said his administration was in favour of extending the truce but a decision on that depended on the situation on the ground.

“We need the ceasefire to continue for long, not just for a few days, but it depends on the operation on the ground,” Bahah told Reuters in the Saudi capital, Riyadh.

“There is an effort for an extension, but it depends on how it is on the ground. But it’s our wish from the government side that we need to extend it,” he added.

Hadi told the conference that the Iran-allied Houthis must quit cities they had captured since they moved on Sanaa and pushed his government aside in September last year, adding that they should not be allowed to “take advantage of the truce to expand more and kill civilians.”

The conference was rejected by both the Houthis and fighters loyal to former president Saleh, meaning it will not provide an opportunity for peace talks.

However, some leading figures from Saleh’s party, the General People’s Congress (GPC), have travelled to Riyadh and pledged loyalty to Hadi’s government.

Ould Cheikh Ahmed said the United Nations, which had previously sponsored Yemeni discussions on ways of ending the crisis before the Saudi-led air strikes began, was looking to resuming the talks in Geneva around the end of May.

“We need flexibility, we need open minds… and we need them to come with an open mind and no preconditions,” he said.

Aid flights have started from the United Arab Emirates to the capital Sanaa, which is under Houthi control and has faced air strikes but no ground fighting. The United Nations said aid ships had docked at ports in Hodeida and Aden.

A shipping source in Yemen said seven ships with fuel, wheat and food had docked in Hodeida and in al-Mukalla on Friday.

On Sunday, a vessel with more than 30,000 food parcels sent by the UAE docked at al-Buraiqa port, near the oil refinery in the southern city of Aden. Aden itself is under control of anti-Houthi forces, according to shipping sources in the city.

The sources said this was the first aid consignment to reach Aden, which has been devastated by heavy fighting.

In some of the worst clashes since the truce, at least 10 people died in overnight battles in Taiz city between Houthis and local militiamen, residents and medical sources said.

Some fighting also took place in the city of Dhalea on Saturday night and residents reported at least five people killed. Clashes were under way in Shabwa, a province east of Aden, where local fighters were trying to wrest back the provincial capital, Artaq, from the Houthis.