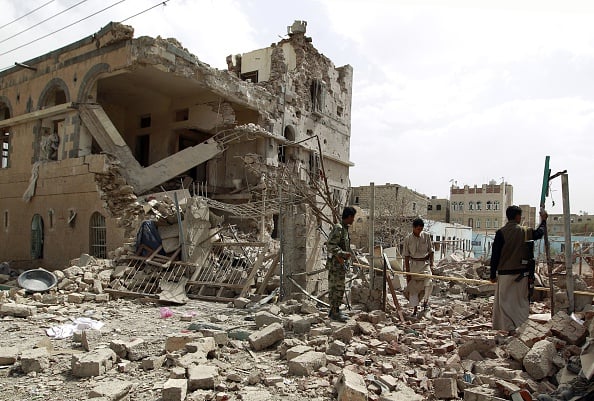 Saudi-led air strikes killed at least 16 people in Yemen on Friday, the country’s dominant Houthi militia said, and the European Union and United States appealed for a pause in the war to enable aid deliveries to stricken civilians.

An Arab coalition has been bombarding Iran-allied Houthi forces and allied army units since March in a campaign to restore exiled President Abd-Rabbu Mansour Hadi to power.

Houthi sources said six people including a woman and a child were killed and six wounded in a dawn air strike on the al Jaraf neighbourhood of the capital Sanaa.

The Houthi-controlled Saba news agency reported 10 people were killed by Saudi-led aerial attacks on a building in Bayt al-Faqih city in the southwestern province of al Hodeida.

Eight Houthis were also killed in an explosion at the public library in the Red Sea port city of Hodeida used by members of the group, local officials said. But the exact cause of the blast was disputed, with one report saying it was caused by an air strike while another said it was a car bomb.

Air strikes were also staged against Faj Attan mountain overlooking Sanaa, home to a military base and a weapons depot that had been a frequent target in the course of the three-month-old war in the Arabian Peninsula country.

In the dawn attack, warplanes also hit the ministry of communications building, Saba reported, setting it on fire and destroying nearby buildings.

Warplanes returned for another raid on Sanaa around noon, but there was no immediate word on casualties or damage.

The Houthis captured Sanaa last September, pushing Hadi’s government aside and then began expanding south and westwards. The president eventually fled the port of Aden in March after the Houthis advanced on his southern stronghold.

The United Nations on Wednesday designated the Yemen war as a Level 3 humanitarian crisis, its most severe category.

On Thursday, the U.S. State Department called for a humanitarian pause” in the conflict during the current Muslim holy month of Ramadan to allow international aid groups to deliver urgently needed food, medicine, and fuel.

The EU said on Friday it supported U.N. efforts to secure a lasting, predictable and sustainable humanitarian ceasefire and demanded that Saudi-led forces ease restrictions on entry of ships to Yemeni ports.

“Such a pause should allow the urgent delivery of humanitarian assistance and essential supplies, including fuel, food and basic commodities,” a statement by EU foreign policy chief Federica Mogherini and EU humanitarian and crisis management commissioner Christos Stylianides said.

Both sides largely observed a five-day humanitarian truce brokered by the United Nations in May to allow in “lifeline” fuel and medicine to civilians trapped in conflict zones.

Elsewhere on Yemen’s battlefields on Friday, a drone targeted an army base held by al Qaeda in the Arabian Peninsula (AQAP) in southeastern Yemen in the early hours, killing four suspected militants, witnesses said.

The base is near Mukalla, the Hadramout provincial capital which had been the target of several drones attacks in recent weeks including one that killed AQAP leader Nasser al-Wuhayshi.

The United States acknowledges using drones to combat AQAP in Yemen as part of its global counter-terrorism effort, but does not comment publicly on individual attacks.

AQAP’s several thousand fighters are seen by Washington as a serious anti-Western threat that could exploit the chaos of Yemen’s war to expand and recruit.

AQAP has carried out attacks on the Houthis, seen as a foe due to their Iranian alliance and adherence to a form of Shi’ite Islam, but has not become a leading combatant in the conflict.