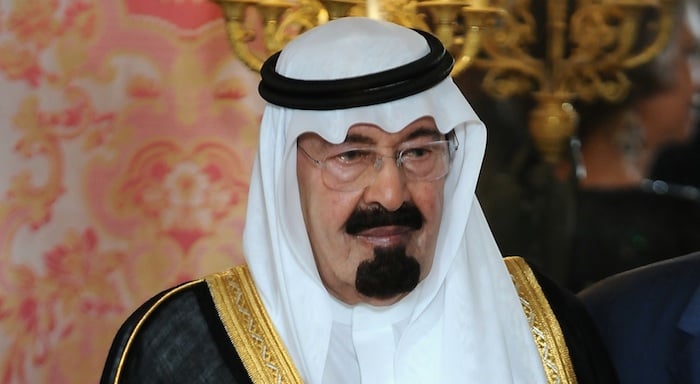 Saudi Arabia’s King Abdullah stopped in Cairo late on Friday to meet with Egypt’s new president Abdel Fattah al-Sisi to show his strong support through a symbolic but brief visit.

The 90-year-old monarch, on his way home from Morocco, did not leave his plane, which was on the ground at Cairo airport for just over an hour. Sisi and his delegation were on board for just over 30 minutes.

Abdullah’s advanced age and frail health mean he rarely travels on state business, so even the short visit was a clear sign of how he has positioned himself as Sisi’s leading Arab ally.

Egypt’s official news agency reported that the talks covered the importance of the two nations working together to address regional challenges, a sign of how the Gulf monarchy sees Cairo as a crucial partner against the rapid rise of Islamism.

Through phone calls to Sisi, donations of cash and oil products, supportive statements and his visit to Cairo, Abdullah has made clear his approval of former army chief Sisi as president.

Abdullah is the first foreign leader to visit Sisi since he took office less than two weeks ago to a cooler reception from Western governments concerned by a crackdown on dissent.

Saudi Arabia, the world’s top oil exporter, and its wealthy Gulf Arab partners Kuwait and the United Arab Emirates, have given more than $20 billion to help Egypt since Sisi ousted Islamist President Moahmed Mursi last July, and are likely to pledge more.

Analysts say Saudi Arabia wants Egypt to be a bulwark against Islamism as conflicts rage in Iraq and Syria that could alter regional alliances and national borders.

Egypt’s state news agency MENA reported that the talks covered Iraq, Syria, and Libya, and “the importance of coordination and joint action between the two countries to meet the challenges prevailing in the region.”

Sisi has not spoken publicly about the Iraq crisis since it erupted days after his inauguration.

No further announcements about financial support immediately emerged from the meeting. Sisi thanked the king for his support to date support and for his initiative in organising a donor conference to “provide necessary support in the coming period”, MENA reported.

The conference was announced by Abdullah 15 minutes after Sisi was declared president. A date has not yet been set.

Sisi served as defence attache in Riyadh during former president Hosni Mubarak’s rule before eventually rising to head up military intelligence, his last job under Mubarak.

Abdullah and Sisi have spoken on the phone since Sisi’s ouster of Mursi, but it is unclear if they had met before Friday.

After the Egyptian delegation left the monarch’s gleaming white plane by escalator, Al-Arabiya broadcast footage of the Saudi king standing to shake hands with Sisi before sitting to talk with him.