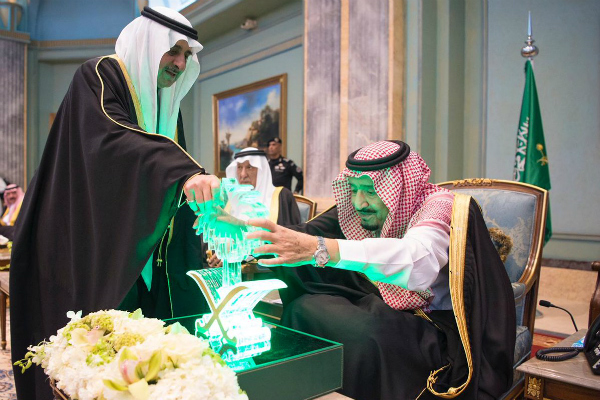 Saudi Arabia’s King Salman on Tuesday inaugurated 151 projects in Tabuk worth more than SAR11bn ($2.9bn), according to state media.

The announcement forms part of a regional tour that has already seen billions of dollars of projects inaugurated in Qassim and Hail.

Saudi Press Agency reported that the monarch would travel to Tarif province on Thursday to inaugurate projects for the first phase of an industrial city worth SAR55bn ($14.65bn).

He will also lay the foundation stone for the second phase of projects worth SAR30bn ($7.99bn) during the trip to the northern border.

Construction of the industrial city, 15km from Tarif, began in early 2014 across an area of 290sqkm. It includes a service area, unconventional gas production facility, industrial zone, residential space and power and water plants, with a rail link to Ras Al Khair Port and nearby facilities on the Arabian Gulf coast.

A further 150sqkm has also been allocated for a phosphate project under state miner Ma’aden.

Read: Saudi’s Ma’aden to start up third phosphate project in 2018

After the completion of the second phase, the kingdom’s phosphate output will rise to nine million tonnes per year.

“The city translates the strategy of the National Industrial Development and Logistics Programme by enabling the logistics, energy, mining and industry sectors to achieve the greatest economic impact,” according to a Ministry of Energy, Industry and Mineral Resources statement.

The programme aims to add SAR1.2 trillion to Saudi GDP, provide 1.6 million jobs and attract SAR1.6 trillion of investments by 2030.