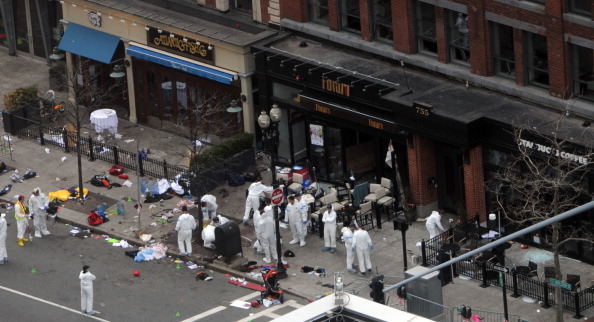 Saudi King Abdullah on Tuesday condemned the twin U.S. bombings that killed at least three people in Boston as “shameful terrorist” acts and said no religion condones such attacks against civilians.

U.S. President Barack Obama called Monday’s bombings targeting the Boston Marathon an “act of terror” and investigators said no additional explosive devices have been found other than the two that detonated near the finish line.

“We were pained by the news we received about the explosions in Boston and the deaths and injuries they caused,” Saudi state news agency SPA quoted King Abdullah as saying in a condolence message he sent to Obama.

“As we condemn these shameful, terrorist acts that normally target the unarmed and the innocent, we assert that the criminal few … behind these acts represent no one but themselves, for no religion, ethics or values accept this,” he added.

Saudi Arabia, the world’s top oil exporter and birthplace of Islam, is a key regional U.S. ally that had faced a wave of al Qaeda attacks on its government facilities and residential compounds for foreign workers, killing dozens between 2003-2006.

Most of the attackers who carried out the Sept. 11, 2001 attacks on the United States were Saudi nationals.

An early lead in the investigation into Monday’s Boston twin bombings and an apartment search ended with law enforcement sources saying that a Saudi Arabian student injured in the blast was likely to be cleared of suspicion.

No one has been arrested, Boston Police Commissioner Ed Davis told reporters on Tuesday morning. Later in the day in Washington, U.S. Homeland Security Secretary Janet Napolitano said there was no indication that the bomb blasts were part of a broader plot.