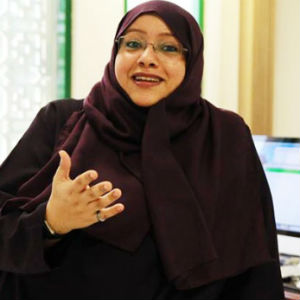 Jabarti, who joined Saudi Gazette in 2011, previously worked as the deputy editor of the newspaper’s rival, Arab News.

Speaking to Al Arabiya, she said: “This is a first for a Saudi daily… A mold has been broken where editors-in-chief of Saudi daily newspapers are concerned.

“Being the first Saudi woman [newspaper editor] is going to be double the responsibility… One’s actions will reflect upon my fellow Saudi women,” she added.

Her predecessor Khaled Almaeena praised Jabarti as being “determined and dedicated.”

“Today I proudly leave my nominee, a female journalist — Somayya Jabarti — who will take the helm of the paper,” he wrote in a column.

“She has been associated with me for almost 13 years and I’ve had the goal almost as long of wanting to see a Saudi woman enter the male-dominated bastion of editors-in-chief.

“It was not a question of gender but of merit that decided and earned her this opportunity,” he added.

Journalism is heavily censored in the Kingdom – the Committee to Protect Journalists (CPJ) ranks Saudi among the 10 most censored countries in the world – and opportunities for women in the field are extremely limited.