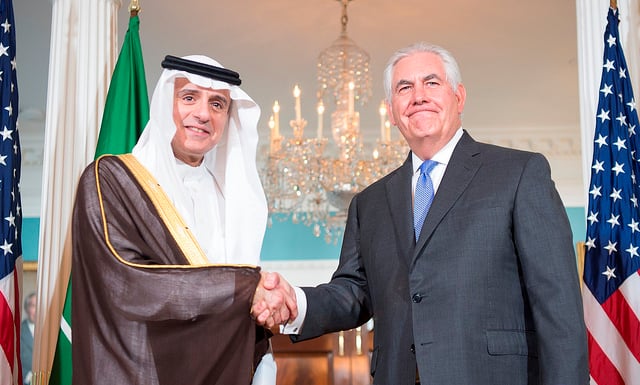 Saudi foreign minister Adel Al-Jubeir has insisted there “is no blockade” on Qatar despite the closing of land, sea and air links by the kingdom and its Gulf neighbours.

Saudi, the UAE and Bahrain led efforts to isolate Qatar last week, with little sign of restrictions being lifted yesterday as the three nations reaffirmed their commitment to denying Qatar access to their air space.

“There is no blockade of Qatar. Qatar is free to go. The ports are open, the airports are open,” Al-Jubeir said while standing next to US secretary of state Rex Tillerson ahead of a meeting in Washington on Tuesday.

The Saudi foreign minister insisted Qatar was free to use its ports and airports, just without access to Saudi Arabia’s airspace and territorial waters.

“What we have done is we have denied them use of our airspace, and this is our sovereign right,” he said. “The limitation on the use of Saudi airspace is only limited to Qatar Airways or Qatari-owned aircraft, not anybody else.”

“The seaports of Qatar are open. There is no blockade on them. Qatar can move goods in and out whenever they want. They just cannot use our territorial waters.”

In other comments yesterday, the UAE’s ambassador to the US Yousef Al Otaiba told reporters that there was no “military component” to the measures against Qatar.

He also insisted the efforts by the country and other Arab states were not an attempt to move the US base in Qatar.

US defence secretary James Mattis will reportedly host his Qatari counterpart Khalid Al-Attiyah on Wednesday amid mixed messages from US President Donald Trump and his counterparts in the Pentagon and State Department regarding the crisis.