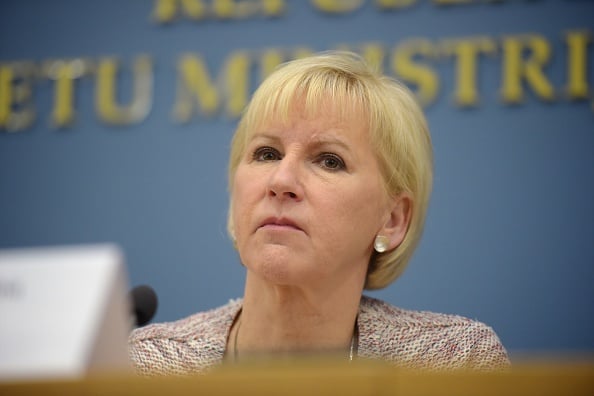 In a few months, Sweden’s minority government has managed to antagonise both Israel and the Arab world, while also angering business leaders at home as Foreign Minister Margot Wallstrom steadfastly pursues human rights and feminism.

Wallstrom’s agenda, and the criticism it has drawn, has exposed a struggle over Sweden’s identity and whether it should become what some politicians call a “moral great power”, or prioritise security and an export-led economy.

After Sweden cancelled a defence cooperation accord with Saudi Arabia last week over rights concerns, the Arab League condemned Wallstrom and blocked her from giving a speech in Cairo. Saudi Arabia recalled its ambassador from Stockholm; hundreds of millions of dollars in business are threatened.

Wallstrom, a former EU commissioner, promised a “feminist” foreign policy when her Social Democrats formed the coalition government last October. Since then, she has described the flogging of a liberal Saudi blogger as “medieval”, winning praise from many commentators for standing up to the Kingdom.

“I won’t back down over my statements on women’s rights, democracy and that one shouldn’t flog bloggers,” Wallstrom said, referring to sentencing of Raif Badawi to 1,000 lashes. “I have nothing to be ashamed of.”

But Sweden is the world’s 12th biggest arms exporter. Its Triple-A rated economy depends on brand exports from IKEA to H&M. With Russia also testing Sweden’s air and submarine defences, this may be the wrong time to put human rights front and centre in foreign policy, her critics say.

Sweden has a history of neutrality. But under the previous centre-right government it forged closer links with NATO, participating in military missions in Afghanistan and Libya, something Wallstrom has promised to tone down.

“Much of what Sweden exports of high technology requires the various types of long-term commitments,” Wallstrom’s centre-right predecessor Carl Bildt wrote in his blog. “There is a real risk … (the cancellation) will hit Swedish interests, not only in Saudi Arabia itself.”

But the Saudi row may not have been Wallstrom’s doing, and has brought accusations of diplomatic miscalculations by the squabbling coalition government.

“This is foreign policy played for a domestic gallery and it gives a strong impression of political mismanagement,” said Fredrik Erixon, director of the Brussels-based ECIPE think-tank.

Prime Minister Stefan Lofven, who worked for nearly two decades as a welder in the defence industry, was in favour of a revised Saudi deal. But this was vetoed by leftist Social Democrats and the Green Party, the junior partner that keeps him in power.

With signs Lofven would give in to the Greens, more than 30 business executives published an open letter saying breaking the deal would “jeopardise Sweden’s reputation as a trade partner”.

“Social Democrats have traditionally been pragmatic in foreign policy,” said Anna Wieslander, deputy director of the Swedish Institute of International Affairs. “So this may be about government personalities and coalition wrangling.”

It was not the only controversy. Wallstrom’s first diplomatic move was to recognise the state of Palestine, prompting Israel to recall its ambassador and angering the United States.

Ironically, this championing of rights may have actually damaged Sweden’s ability to punch above its weight.

The first victim may be its ambition to win enough votes to be a rotating member of the U.N. Security Council.

“The Swedish brand, as a reliable partner who you can talk to, has been badly hurt,” said Sven Hirdman, a former Swedish ambassador to Moscow.