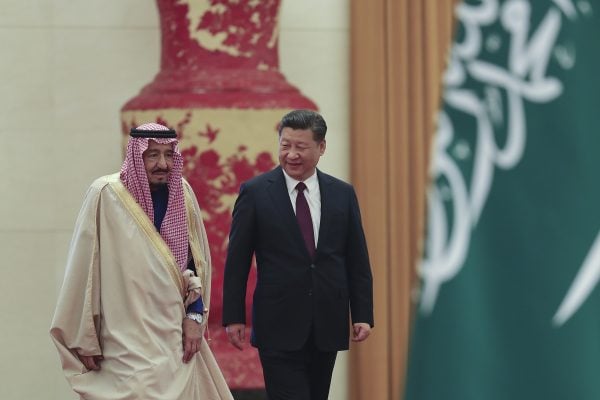 Saudi Arabia’s Council of Ministers has given approval for discussions with China for the formation of a joint investment fund.

The fund was one of several means of cooperation with China given the go ahead by the council of the world’s largest oil exporter during a cabinet session held on Tuesday, according to Saudi Press Agency.

Approval was also granted for discussions on a draft judicial cooperation agreement and a memorandum of understanding on “cooperation in the field of information”.

Minister of energy, industry and mineral resources Khalid Al-Falih is expected to lead discussions that will see a draft memorandum of understanding established for the fund, the potential size of which was not disclosed.

Al-Falih was in China last week where he met with Chinese senior vice-premier Zhang Gaoli ahead of a visit by a Chinese delegation to the kingdom this week for the second round of meetings of a Saudi-Chinese Joint Committee.

On Thursday, the kingdom is hosting the Saudi Investment Forum in Jeddah to discuss investment opportunities for Chinese private sector firms and investors under the theme of China’s Belt and Road Initiative and the kingdom’s Vision 2030 diversification plan.

The two sides have strengthened ties in recent months following a visit to China by Saudi Arabia’s King Salman in March as part of a wider Asia tour.

That visit saw deals worth a potential $65bn signed off ranging from exploring investments in oil and petrochemical plants to e-commerce and cooperating in renewable energy.

Major announcements from the trip included a memorandum of understanding between state oil giant Saudi Aramco and China’s Norinco to build a refining and chemical complex in China worth an estimated $10bn and an agreement between Saudi Basic Industries Corp (SABIC) and Sinopec to develop petrochemical projects in China and Saudi Arabia.