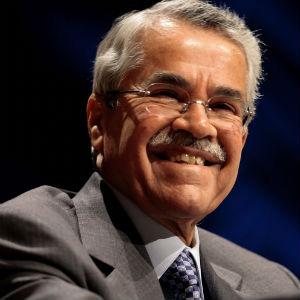 Top crude exporter Saudi Arabia wants an oil price of around $100 a barrel and would like to see global inventories rise before demand picks up in the second half of the year, Oil Minister Ali al-Naimi said on Sunday.

International Brent crude settled at $112.26 on Friday, well off a peak of over $128 in March. Brent has mostly traded above $100 since early 2011, keeping fuel costs high and threatening to damage a fragile global economy.

“We want a price around $100, that’s what we want,” Naimi told reporters ahead of an industry event in Australia. “A $100 price is great.”

Saudi Arabia is working at bringing Brent crude prices to that level, he added. The kingdom, OPEC’s biggest producer, said it pumped 10.1 million bpd in April, its highest for more than 30 years, as it bid to meet growing demand and curb oil prices.

Prices have stayed high in 2012 due to concern about disruption to global supply from US and European sanctions aimed at hurting Iran’s crude export revenues and forcing Tehran to halt its nuclear programme.

“That should give comfort to consumers,” he said.

Inventories are at the equivalent of around 58 days of demand, but Saudi Arabia would like to see stockpiles build more ready for the seasonal increase in fuel consumption in the second half of the year, Naimi said.

“It should be a little bit higher, because you are going into the third and fourth quarter, and demand will be higher as usual,” he said.

The International Energy Agency said on Friday that oil prices were likely to stay high, despite a dramatic improvement in world supply and a big build in stocks, due to the tensions between Iran and the West.