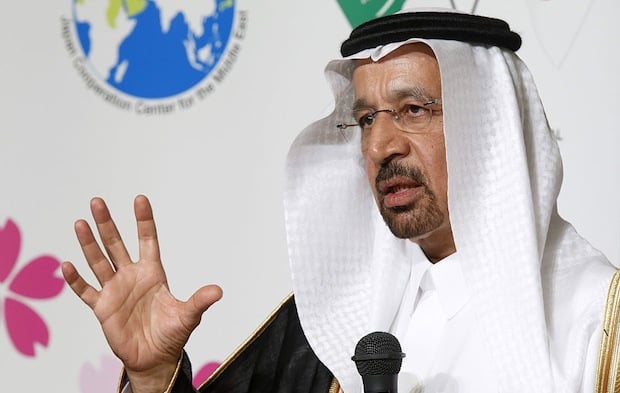 Saudi Arabia’s energy minister Khalid Al-Falih said on Monday that oil markets were rebalancing after years of oversupply, but that he still expected an OPEC-led deal to cut output during the first half of the year to be extended to all of 2017.

The Organization of the Petroleum Exporting Countries (OPEC), of which Saudi Arabia is the de-facto leader, and other producers including Russia, pledged to cut output by 1.8 million barrels per day (bpd) during the first half of the year to prop up the market.

But global inventories remain high, pulling crude oil prices back below $50 per barrel and putting pressure on OPEC to extend the cuts to the rest of the year.

“Based on consultations that I’ve had with participating members, I am confident the agreement will be extended into the second half of the year and possibly beyond,” said Falih, Saudi Minister of Energy, Industry and Mineral Resources, during an industry event in Kuala Lumpur.

Falih said recent price falls had been caused by the low demand season and refinery maintenance, as well as by non-OPEC production growth, especially in the United States.

U.S. oil production has gained more than 10 per cent since mid-2016 to 9.3 million bpd, close to levels of top producers Russia and Saudi Arabia.

Despite this, Falih said that markets had improved from last year’s lows, when crude prices fell below $30 per barrel.

“I believe the worst is now behind us with multiple leading indicators showing that supply-demand balances are in deficit and the market is moving towards rebalancing,” he said.

He also expected global oil demand to grow at a rate close to last year. In China, oil demand growth should match last year’s due to a robust transport sector, while India should record healthy growth, he said.

Almost all expected oil demand growth over the next 25 years is likely to originate from Asia as the region’s population grows, with countries such as Vietnam and the Philippines rising to become included in the top 20 global economies.

Asia will also account for nearly two-thirds of global gas demand, by that time he said.

Global investments in exploration and production have also fallen behind, potentially creating a big supply-demand gap in the next few years, he said.

“Conservative estimates predict that we will need to offset 20 million barrels per day in combined demand growth and natural decline over the next five years,” Falih said.

“That is why I fear … we are heading into a future of supply-demand imbalances,” he said.

To help meet this demand, state oil company Saudi Aramco will invest $7bn in a refinery-petrochemical project with Malaysia’s Petronas.

Also, Saudi Aramco’s project with Indonesia’s Pertamina to expand the Cilacap refinery will enter front-end engineering design in the second half of this year, Falih said.

Falih shrugged off talks that the rise of alternative energy could reduce fossil fuel consumption, saying renewables still face hurdles such as affordability. He does not expect oil demand to peak anytime soon.