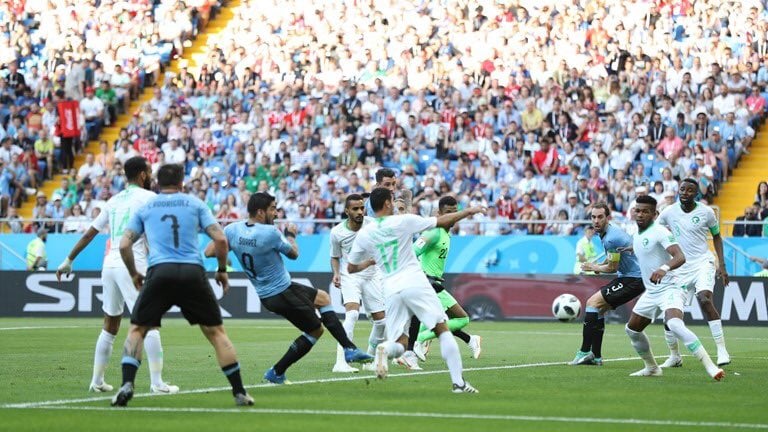 Saudi Arabia and its fellow Arab states Egypt and Morocco had a relatively short return to the football World Cup after losses in their first two games ensured they would not go through to the play offs.

The ‘greens’ were 1-0 down to Uruguay after 22 minutes following a strike by Luis Suarez from close range. This followed a 5-0 defeat to hosts Russia in the opening game of the tournament.

The result meant regardless of the final socre against Egypt next Monday, Saudi had no way of proceeding to the next stage of the tournament.

Morocco and Egypt crashed out on Tuesday and Wednesday with losses to Uruguay and Russia and Iran and Portugal respectively.

The Saudi team had an eventful start to the tournament, their first in 12 years, after the country filed a complaint with governing body FIFA over beIN Sport’s coverage of its loss to Russia.

The kingdom alleged the Qatari broadcaster’s coverage contained political messages aimed at insulting Saudi Arabia and its leaders in the framework of incitement and spreading hatred among fans and people in the region”.

The chairman of the kingdom’s football federation also reportedly said Saudi players were facing disciplinary action for their poor performance.

After this incident, the team then suffered a scare on the way to the game against Uruguay after their plane caught fire.

Russia’s aviation regulator said the incident “did not necessitate an emergency landing” but the tournament organisers apologised and said the plane would not be used to transport any other team.

Yesterday’s results leave Tunisia as the final Arab team in the tournament.

They face Belgium on Saturday after losing 2-1 to England on Monday evening.