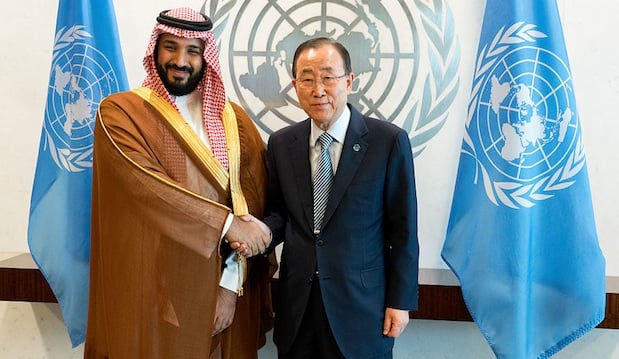 When asked on his way into the meeting if he was still upset with Ban, Deputy Crown Prince Mohammed bin Salman, who is in New York for business meetings after visiting Washington and the U.S. West Coast, said: “I’m not angry.”

Prince Mohammed, who was 45 minutes late for the meeting, simply smiled when Ban told him that he stood by the U.N. report on children and armed conflict, a diplomatic source told Reuters.

The U.N. report said the coalition, which began an air campaign in March 2015 to defeat Iran-allied Houthi rebels, was responsible for 60 per cent of child deaths and injuries in the conflict last year, killing 510 and wounding 667.

An official U.N. statement said Ban and Prince Mohammed discussed “putting into place concrete measures that could improve the situation on the ground” to better protect children and civilians in Yemen.

“The Secretary-General expressed the hope that by the time he presents the Children and Armed Conflict report to the Security Council in August, he could point to progress on the protection of children and civilians in Yemen,” it said.

Prince Mohammed, who is also the kingdom’s defense minister, did not answer questions when he left. Saudi U.N. Ambassador Abdallah Al-Mouallimi described the meeting as excellent.

“The focus was on international issues, especially the issues of the region and there was broad agreement on virtually everything that was discussed,” Mouallimi told reporters.

He said Ban and Saudi Arabia were both optimistic about peace talks in Kuwait between the government and Houthis, which have dragged on for two months with few concrete results.

Leila Zerrougui, the U.N. envoy on children and armed conflict, opposed Ban’s decision to remove the coalition from the blacklist, despite Saudi threats that the U.N. could face a fatwa declaring it anti-Muslim, diplomatic sources said.

A fatwa is a legal opinion used in Sharia, or Islamic law. In Saudi Arabia fatwas can be issued only by the group of top, government-appointed clerics and are sometimes commissioned by the ruling family to back up its political positions.