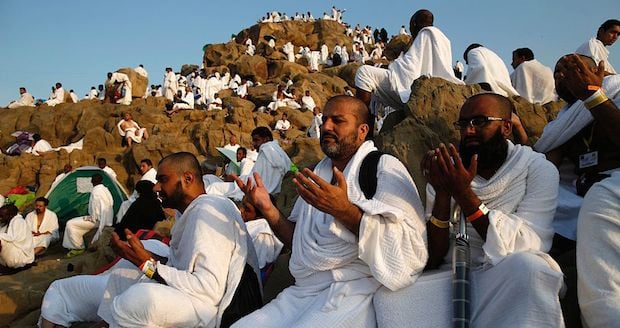 Saudi authorities deployed drones to watch over nearly two million pilgrims as they descended Mount Arafat on Sunday and entered the haj’s final stages, part of stepped-up efforts to avoid a repeat of last year’s crush amid an escalating war of words with Iran.

Last year, in one of the deadliest disasters to befall the annual Muslim rite in decades, the crush killed nearly 800 pilgrims, according to Riyadh, although counts by countries of repatriated bodies showed over 2,000 people may have died, more than 400 of them Iranians.

On foot or seated on the roofs of buses, the faithful climbed down the craggy hills outside Mecca at sunset and set out en masse for the open plateau of Muzdalifah.

There they collected pebbles in the dark before retreating for the night into Mina, the narrow city of air-conditioned white tents where last year’s crush occurred as pilgrims moved to throw their pebbles in a ceremonial stoning of the devil.

Authorities have deployed drones to reinforce a network of electronic surveillance of the crowds that would alert authorities to intervene quickly if necessary.

Saudi Arabia has said that 1.855 million pilgrims, most of them from outside Saudi Arabia, have arrived for the annual pilgrimage, a religious duty for every able-bodied Muslim who can afford the journey.

Saudi Arabia stakes its reputation on its guardianship of Islam’s holiest sites and organising haj, a role that Iranian authorities have challenged as part of a growing dispute over the handling of last year’s disaster.

The Grand Mufti, the kingdom’s top religious authority, warned Iran that to disrupt the haj would be unacceptable, in comments reported by local daily al-Okaz on Sunday.

“Any policy that aims to divert the haj from its proper course is un-Islamic and is a criminal policy,” he was quoted as saying.

Saudi Arabia’s state news agency, SPA, also published a four-part broadside accusing Iran’s leaders of using “the cloak of religion to implement heretical policies.” The series said 300 Iranian pilgrims caused last year’s crush by taking a wrong turn in the direction opposite where they had been assigned to move.

Later updates of the SPA stories removed the reference to the 300 Iranian pilgrims and their actions, without elaborating.

Saudi authorities have previously suggested that pilgrims failing to follow crowd control rules bore some blame for the disaster, but have not released any further details. An investigation into the incident is still pending.

Pilgrims from Iran are not attending haj this year, after talks between the two Middle East powers over haj arrangements broke down in May.

The 2015 crush, in which two large groups of pilgrims arrived together at a crossroads in Mina, a few km (miles) east of Mecca, on their way to performing the “stoning of the devil” ritual at Jamarat, was the worst disaster to strike the annual pilgrimage for at least 25 years.

The Saudi authorities redesigned the Jamarat area after two stampedes, one in 2004 and one in 2006, killed hundreds of pilgrims, and the frequency of such disasters has been greatly reduced as the government spent billions of dollars upgrading and expanding haj infrastructure and crowd control technology.