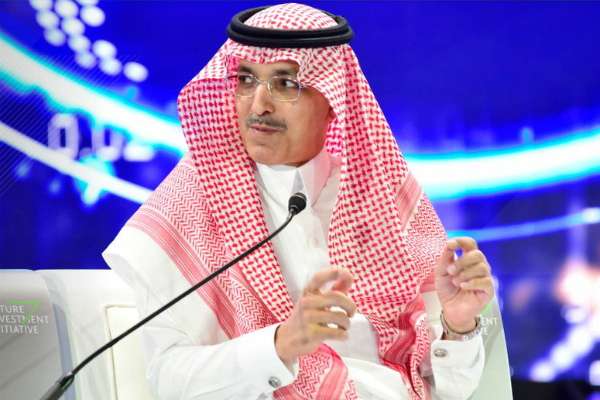 Spending is expected to fall from about SAR1.05 trillion ($280bn) this year to SAR1.02 trillion in 2020, then to SAR955bn by 2022, according to a pre-budget statement issued by the finance ministry on Thursday.

That won’t mean an early fall in the deficit, with the government of the biggest Arab economy expecting the shortfall to rise to 6.5 per cent of gross domestic product next year, compared to 4.7 per cent in 2019. That’s slightly above a 4.2 per cent forecast but well below a median estimate in a Bloomberg survey of economists for a shortfall of 7.1 per cent.

“We believe at one stage you will need to start plateauing and then reducing your government spend as the economy picks up,” he said. “Some of the spend that we would have otherwise made next year and the year after is now being made by the private sector.”

The government started providing a preliminary budget outlook for the first time last year as part of an effort to make its public accounts more transparent, and kept the figures largely unchanged in its final fiscal program. Other key figures released on Thursday include:

* Officials have revised down GDP growth for this year from 2.6 per cent

* A breakdown of oil and non-oil revenue should be provided in the final budget announcement in December, Al-Jadaan said

* The government expects deflation of 1 per cent this year, with 2 per cent inflation in 2020

Saudi Arabia has tried to keep the fiscal taps open without blowing a bigger hole in the budget as it steers the economy from its near-total dependence on crude. Despite the acceleration in non-oil growth this year to the fastest since 2015, output curbs negotiated by OPEC are increasingly a drag. The attack on Saudi oil infrastructure last month also put the spotlight on risks ahead.

“The key message is one of fiscal prudence while spending is still remaining quite high,” she added. “I think it would have been difficult for Saudi to announce a very expansionary budget with the oil price at the current level.”

Still, the kingdom has started to make some headway. It’s the only OPEC producer in the Gulf to cut its break-even oil price both this year and next, according to the International Monetary Fund. Saudi Arabia’s goal is to run a balanced budget in 2023.

“There are numerous fiscal reforms that happened during the past two or three years that have led to positive results in disciplining public finances,” Al-Jadaan said, adding that in 2020 and beyond, he expects the kingdom to “start reaping the benefits of the policies” that have been implemented so far.

Fiscal challenges still abound. Fitch Ratings has warned about entrenched budget deficits when it downgraded Saudi Arabia this month for a third time since 2016. In September, the IMF said the kingdom needed to tighten its fiscal policy to safeguard the budget against a drop in oil prices.

Bloomberg Economics expects this year’s shortfall at 7.1 per cent of GDP, while Fitch forecasts it will widen to 6.7 per cent as a result of lower average oil prices and output.

Meanwhile, the prospects for the economy are deteriorating. The IMF just slashed its forecast for Saudi GDP growth this year to near zero from 1.9 per cent, according to its World Economic Outlook.

“While non-oil growth is expected to strengthen in 2019 on higher government spending and confidence, oil GDP in Saudi Arabia is projected to decline against the backdrop of the extension of the OPEC+ agreement and a generally weak global oil market,” the IMF said.

Al-Jadaan was upbeat, however, citing progress on reforms that are bearing fruit.

Energy subsidy cuts will continue as planned, the minister said. “There is no change, we have a time frame for certain energy price reform and within that time frame, we are adjusting as the economy requires,” he said. “But the plan continues, and as you have seen we have implemented some of that already this year.”

Asked whether proceeds from the planned initial public offering of state oil giant Saudi Aramco will be included in the budget, he said they would not go to the treasury but rather to the Public Investment Fund to invest.

“One of the key reasons why we plan to IPO Aramco is actually to diversify and that means you will use the proceeds” of the stake sale to invest in other sectors, he said.