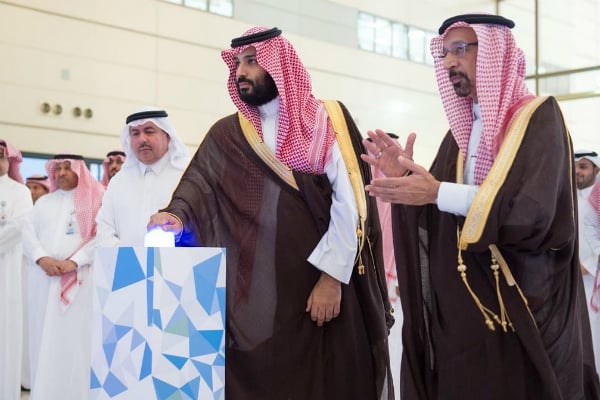 The launches, which also covered renewable energy, water desalination, genetic medicine and aircraft manufacturing, came during a visit to King Abdulaziz City for Science and Technology (KACST), according to Saudi Press Agency (SPA).

During the visit, the royal laid the first stone for an aircraft fuselage development facility at King Khalid International Airport and inaugurated the Saudi Central Laboratory for Human Genome – designed to map the kingdom’s genetic profile to track mutations and hereditary diseases.

Two production lines for solar panels and cells linked with a lab in Uyaynah and a series of start-up incubators and accelerators linked to the Bader programme in Dammam, Qassim, Al-Madinah Al-Munawarah and Abha were also unveiled.

He was also briefed on several other projects in the research sector including a smart factory and satellites.

The nuclear reactor launched by the royal was described as “low-energy” and for research purposes.

However, the plans are likely to draw international scrutiny as the kingdom selects bidders for its first nuclear plant

Saudi Arabia plans to build two nuclear plants to diversify its energy supply and has been in talks with companies from South Korea, the United States, Russia and China for the tender.

Last week, Republican and Democratic senators in the US urged President Donald Trump to suspend civilian nuclear energy talks with the kingdom over the murder of journalist Jamal Khashoggi at its Istanbul consulate on October 2.

Five Republican lawmakers led by senator Marco Rubio said in a letter to Trump that they would use the Atomic Energy Act to block any US-Saudi nuclear agreements if Trump did not cut off talks, according to Reuters.

The kingdom initially said Khashoggi’s death came accidentally during a fistfight but the public prosecution later admitted there was information suggesting it was premeditated.

Saudi Arabia has said the killing was the work of a rogue security team but some Western and Turkish officials allege the order came from the crown prince.

In an interview with CNN in recent days, the journalist’s sons asked for the return of his body.

Read: Sons of slain Saudi journalist Khashoggi appeal for return of his body