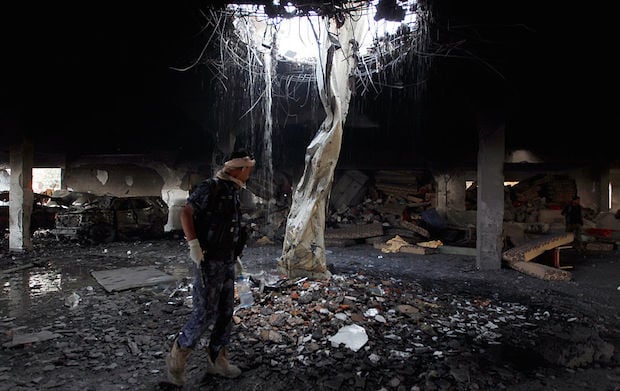 The Saudi coalition in Yemen has been urged to apologise and provide assistance to victims after it was found to have made an error made during an attack targeting Houthi militants in Hajjah Governorate in 2015.

The laser guided bomb intended for the anti aircraft battery deviated from its intended route because of bad weather and fell on the factory some 80m away, according to the official, resulting in the deaths of 14 labourers and injuries to 11 other finishing their nightshift.

Al-Monsour denied coalition responsibility in another incident where it was accused of targeting a hospital in Al-Hodeida in October 2015 and said the site targeted was 500m away.

He also said an attack on Al-Bayda prison in October that killed 10 people and injured 15 was legitimate following allegations by the International Committee of the Red Cross.

He claimed Houthi and Saleh militias were using the facility to store munitions and it was therefore a military objective under the provisions of International Humanitarian Law.

Further claims by the Red cross of an attack on Saada Old City on October 21 that year were also dismissed.

Al-Monsour said the coalition carried our aerial reconnaissance of two targets – a building and jeep – but the plane did not have permission to attack as they were located in a world heritage site.