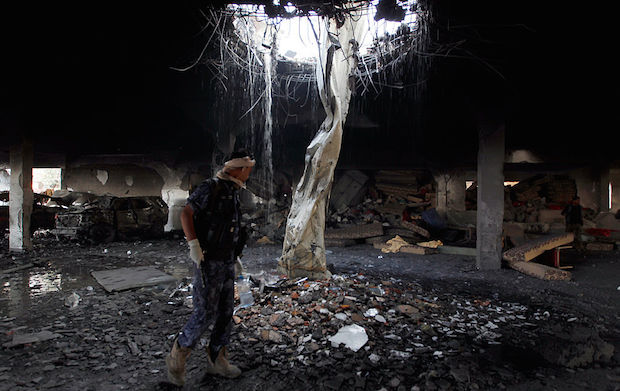 The Saudi-led coalition fighting the Iran-backed Houthi movement in Yemen attacked a funeral there after receiving incorrect information from Yemeni military figures that armed Houthi leaders were in the area, an investigative body set up by the coalition said on Saturday.

The Saudi-led campaign in Yemen has come under severe criticism since last Saturday’s air strike on the funeral gathering in the Yemeni capital Sanaa, killing 140 people according to one U.N. estimate, and 82 according to the Houthis.

Mourners who died in the attack included some of Yemen’s top political and security officials, potentially galvanising powerful tribes to join the Houthis in opposing a Saudi-backed exiled government.

“A party affiliated to the Yemeni Presidency of the General Chief of Staff wrongly passed information that there was a gathering of armed Houthi leaders in a known location in Sanaa, and insisted that the location be targeted immediately,” the investigators concluded, according to a statement.

The Joint Incidents Assessment Team (JIAT) said in the statement that the coalition’s Air Operations Centre in Yemen also failed to obtain approval for the strike from commanders, a violation of protocol.

The JIAT called for a review of the rules of engagement and for compensation for the families of the victims. It also said “appropriate action” should be taken against those who caused the incident, without elaborating.

A spokesman for the JIAT said the actions could include judicial proceedings.

“Naturally, these people must be confronted about what led to this mistake. They have the right to defend themselves, but if it becomes clear that legal measures should be taken, the coalition forces are concerned with that,” said Mansour Ahmed al-Mansour, a legal adviser to the JIAT.

The coalition accepted the findings in a statement released hours later and said it had begun to implement the JIAT’s recommendations.

“The coalition command expresses its regret at this unintentional incident and the ensuing pain for victims’ families,” it said.

“The incident is not in line with the coalition’s objectives, namely protecting civilians and restoring safety and stability to Yemen.”

International condemnation of the strike had been swift. The White House announced an immediate review of Washington’s support for the 18-month-old military push against the Houthis.

Senior U.S. officials also said the attack had killed senior figures who were important to the reconciliation process.

The strike has threatened to escalate Yemen’s civil war and pull the United States further into the conflict.

Houthi-led forces had responded to the attack by launching missiles into Saudi Arabia and possibly at a U.S. warship stationed off the Yemeni coast, prompting U.S. retaliatory strikes against what Washington said were Houthi radar sites.

The Houthis have denied firing missiles at the U.S. Navy destroyer.

The United Nations estimates that 10,000 people have been killed in the war and blames coalition air strikes for 60 percent of some 3,800 civilian deaths since March 2015.

Attacks continued on Saturday, with Houthi media claiming responsibility for firing another missile into Saudi Arabia, at a military camp in Asir province.

A spokesman for the coalition could not immediately be reached for comment.