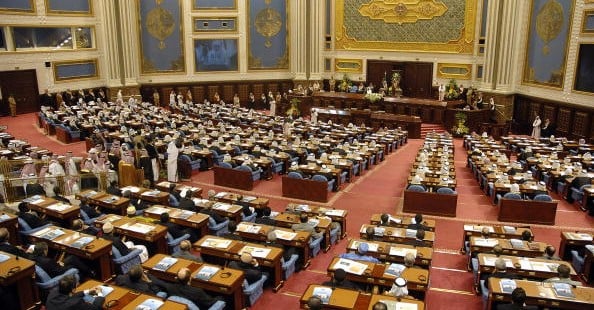 Dozens of Saudi clerics staged a rare protest in front of the Royal Court on Tuesday against King Abdullah’s decision to appoint women to a body that advises the government on new laws, a sign of growing conservative unease at modest social reforms.

On Friday, King Abdullah appointed 30 women to the Shura Council, giving them a fifth of the seats in the consultative body – a move he promised to make in 2011.

The kingdom’s top religious authorities including the Grand Mufti accepted that decision, but the gathering of about 50 clerics outside the Royal Court suggested wider disquiet among conservatives in the world’s top oil producer.

A Saudi activist in touch with the clerics confirmed the accuracy of photographs showing them standing in a group as they demanded a meeting with King Abdullah and his top aide Khaled al-Tuwaijri, seeking to offer them “advice”.

Tuwaijri, the Royal Court chief of staff, is believed to be King Abdullah’s right-hand man and is seen by many Saudis as a driving force behind the country’s cautious reforms.

“The clerics were in front of the royal court to address the king and Tuwaijri with regard to women in the Shura Council … they waited for two hours but were denied access,” Waleed Abu al-Khair told Reuters by phone.

This is the second time in two days that clerics, who have issued a religious edict banning any kind of public protest, have publicly expressed concern at decisions by the king.

“There is a contradiction … The real Salafis do not do what these (clerics) are doing,” said Saudi political analyst Khaled al-Dakheel.

“Maybe we are now faced with a socio-political change in the society where we have the traditional Salafi school of thought that adheres to all its principles and now there is a new generation of Salafis emerging that hopes for different proposals. This requires examination,” Dakheel said.

A close ally of the United States, Saudi Arabia escaped the kind of unrest that toppled leaders across the Middle East in the past two years thanks to a massive social spending package and the religious edict from clerics, banning protests.