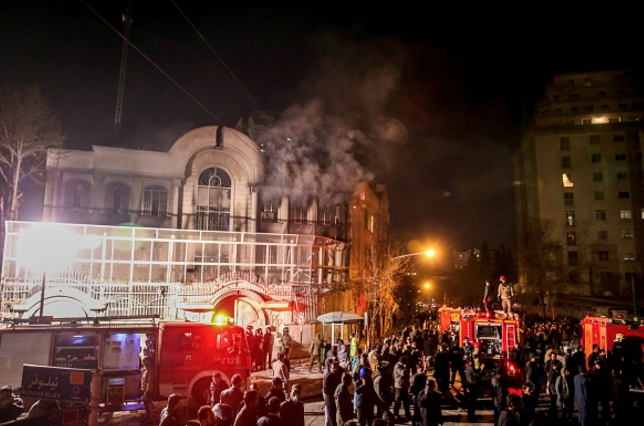 Saudi Arabia will be cancelling all air traffic to and from Iran and end commercial relations with the country as tensions between the two regional rivals continue to escalate.

Saudi foreign minister Adel Al Jubeir told Reuters on Monday that the kingdom will bar its citizens from travelling to Iran. However, Iranian pilgrims will still be allowed to visit Mecca and Medina, he said.

He stressed that Iran must behave like “a normal country” instead of “a revolution” and respect international norms for ties to be restored.

The row between the nations began after Saudi Arabia executed 47 people including prominent Shia cleric Nimr Al Nimr for terrorism offences on Saturday.

Iran reacted strongly and summoned the Saudi ambassador in Tehran to condemn the execution. Protesters also set fire to the Saudi embassy in Tehran late on Saturday.

On Sunday, Saudi retaliated by saying that the kingdom was cutting diplomatic ties with Iran and that Iranian diplomats and staff had been given 48 hours to leave the country.

Other Gulf countries have also taken a strong stance against Iran with Bahrain also severing diplomatic relations with Tehran.

Iranians diplomats in Bahrain have been given 48 hours to leave the country, the official Bahrain News Agency reported on Monday. The Gulf state also shut down its diplomatic mission in Tehran.

Bahrain’s foreign affairs ministry blamed its decision on the “continued worsening of the blatant and dangerous interference of Iran… which confirms a determination to spread devastation and destruction and provoke unrest and strife in the region by providing protection and support for terrorists and extremists”.

“The criminal cowardly attacks on the embassy of Saudi Arabia in Tehran and its consulate in the city of Mashhad constitute a flagrant violation of both international conventions and treaties and embody the very dangerous sectarian policies that cannot be ignored or accepted,” Bahrain’s ministry said.

It requires an “immediate response with full force and a confrontation with great resolve in order to prevent wide chaos and to preserve the security and stability of the entire region,” it added.